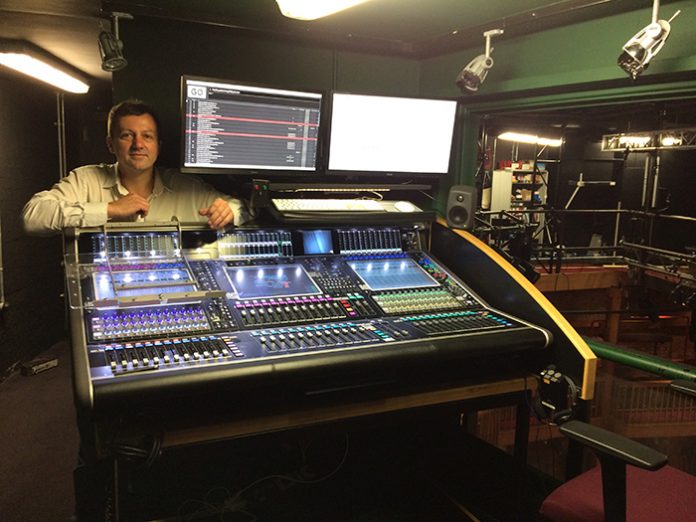 DiGiCo consoles have been a fixture of the Royal Shakespeare Company since 2003, when a D5T – the theatre specific version of the original D5 Live – was installed in its Royal Shakespeare Theatre in Stratford upon Avon. 12 years of sterling service later, that same D5T has finally been replaced with a new DiGiCo SD7.

The D5T was initially bought for use on the Royal Shakespeare Company (RSC) production of Beauty and the Beast, a development that RSC Head of Sound, Jeremy Dunn remembers well.

“We previously had a 44 channel analogue console but, even with the D5T’s then colossal 96 channels, the sound designer always needed just one more,” he smiled. “The D5T served the theatre for eight years, before the 1400-seat venue was redeveloped and we installed an SD7T.”

Since then the D5T has continued in frequent use, first in the temporary Courtyard theatre while the main house was redeveloped, then for touring and residences in the Roundhouse, London, before most recently alternating with a second D5T in the RSC’s 450-seat Swan Theatre.

“When the time came to purchase a new console for the Swan Theatre, there was a strong feeling from show operators and designers within the sound department that we needed the dual redundancy of engines, PSUs and optical/MADI that we enjoy with the Royal Shakespeare Theatre’s SD7T,” says Jeremy. “For ease of programming, it was also felt that we should stick to the DiGiCo SD series. Personally, I also like the sonic invisibility of DiGiCo consoles, the endless I/O and the space they save.”

Installed in the Swan Theatre this October, the SD7 was supplied with three new SD-Racks, each fully populated with 56 I/O, plus both MADI and optical connections.

“It may seem indulgent to have such a large and powerful desk in a 450-seat venue, but our shows play in repertoire and changeovers can be limited to only 90 minutes between matinee and evening performances. This usually involves an alternate band position, so instant show recall becomes very useful and it saves a lot of time and errors,” said Jeremy.

“Currently only the big productions from the Royal Shakespeare Theatre are transmitted live to screen, but when the decision is taken to go live from the Swan we’ll be ready, as the extra MADI Ports on the SD7 make connection to the outside broadcast trucks so much easier.”

The first productions set to benefit from the new SD7 will be productions of Euripides’ Hecube, Helen Edmundson’s Queen Anne and William Congreve’s Love for Love, where the SD7 will take control of a live nine-piece orchestra with some large, unusual and interesting percussion set-ups, with up to 48 channels of sound effects directly connected through MADI, along with a number of a radio mics and effects machines

“Our studio is also using an SD11, while our SD9 – which recently toured with the Taming of the Shrew and Othello – will be the new console for our re-developed The Other Place venue which opens in 2016, celebrating 400 years since Shakespeare’s death,” said Jeremy.

The RSC is busily employing further DiGiCo consoles hired from Autograph. These include an SD7T on Matilda at the Cambridge Theatre, with another for Death of a Salesman at the Barbican from November.

“We were also introduced to the SD10 in recent hire for Oppenheimer at the Vaudeville theatre,” said Jeremy. “Although the SD10 has no redundant engine, we had support from Autograph. They have been critical to the success of our London shows, especially as support from Stratford upon Avon is two hours away.”