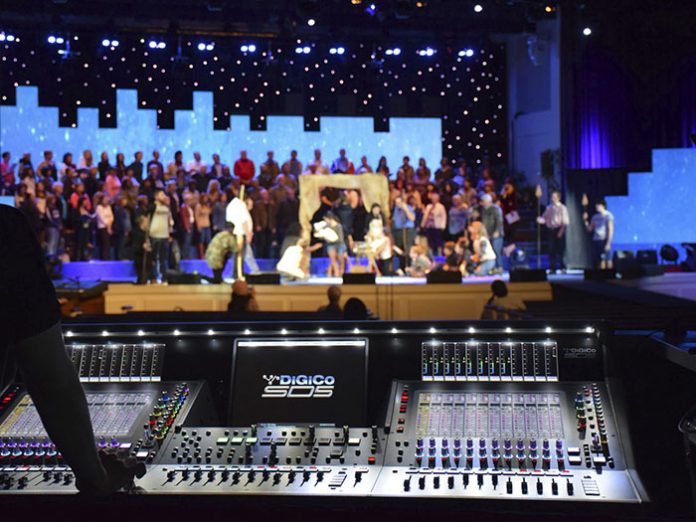 When the time came for Cornerstone Church to go digital in its 4,700-seat sanctuary, there were three targets that had to be hit: Freedom for the ministers’ and musicians’ visions, Financial responsibility for proper stewardship, and Foundational planning for the future. With a church that ministers to 20,000 members locally and reaches every country on the planet, the genesis of where that ministering signal starts is crucial to the success of everything that follows.

Planning the renovation of the church’s audio system covered a period of a year and a half and was completed in late summer with the installation of two new DiGiCo mixing consoles: the SD5 at FOH and the SD10 for monitors. These desks act as the hub of a new fiber-based signal transport system that has transformed the church’s signal flow and vastly improved the sonic quality of both live and broadcast services. And the best was yet to come.

“This ministry has an incredible amount of musical talent,” said Joey Engel, one of Cornerstone’s FOH Engineers. “Pastor John and Pastor Matthew are remarkable preachers, so supporting the spoken word is obviously important and consistently accomplished, whereas the limitations inherent in our original system were holding them back musically.”

To understand the importance music holds at Cornerstone, one only has to look at Difference Media. Formed by Pastors John and Matthew Hagee, this music label is already attracting national artists and receiving industry acclaim. “Music has always been paramount at Cornerstone,” added Joey. “The pastors had reached a point where we needed to overhaul the system to keep up with their vision and so the search began.”

Planning for the new system began in 2014, with direction from noted church-sound consultant Kent Morris, and key to the next generation of sound at Cornerstone would be digital consoles anchoring a fiber-based signal transport system that also had to tie into the existing broadcast infrastructure. In this case, the two DiGiCo SD series desks are connected via a DiGiCo fibre optic loop, and a digital split from each SD-Rack feeds the church’s broadcast facility via DiGiCo Purple Boxes. These are CAT5/MADI-to-optical converters capable of taking either a CAT5 connection from a DiGiCo SD console or D-Rack, or a MADI connection from an SD console, SD-Rack or other MADI device, and then converting it for optical transmission over fiber. The Purple Box allows two MADI or D-Rack streams, or a combination of the two, and offers up to 128 available channels with completely independent I/Os.

This was important for two reasons: the church needed to increase the number of available channels after maxing out the original system, and the performers absolutely needed more from the onstage monitor console. Feeding an Allen & Heath ME-1 personal monitor system from the SD10 console via MADI turned out to be just right.

“With the SD10/ME-1 combination we can give the musicians so much control over what they hear,” noted Franco Herrejon, Monitor Engineer for Cornerstone, “It was like Christmas in August when we rolled this out; the musicians were in control of their mix, and that has allowed them a freedom they have never had here before. Also, Pastor Matt and the other singers can hear so much better. I can direct whatever they want to their in-ear mixes without compromising stage volume or risking feedback.”

Ryan Shelton and Troy Bishoppetty from BP SLV were instrumental in the design, planning and training phases of this project along with Cornerstone FOH System Engineer Daniel Cale. “We had exactly three days to tear out the existing copper from the conduits, run all of the fiber, install the consoles, set up the personal monitor mixers, set levels and EQ for every input, and make sure that broadcast and the sanctuary were ready for Sunday, which included scheduling a rehearsal with the orchestra so they could dial in their monitors.”

During the workweek, the consoles were set up in a classroom scenario, side by side in the choir loft, playing back a recorded Sunday morning service from Waves Tracks Live. Daniel said: “This way we could do a lot of the preliminary work, like laying out and labeling the consoles, running the pre-recorded services top to bottom, and getting some ‘stick time’ so the first Sunday with the new equipment would be flawless.”

Troy added: “We had all of the equipment in their installed locations except for the FOH console so that the only unknown we would be dealing with was how long it would take to pull out hundreds of feet of 28-year-old copper wire. And even if the conduits could not be cleared in a week, we had enough tactical fiber to run from the stage racks to FOH so that Sunday would be secure. It really took the stress away from everyone, especially the engineers, because we knew all of the equipment and fiber connections were working beforehand. It was a real blessing to have the sanctuary to work in during the week, which allowed us to take this approach with the install.”

Veteran DiGiCo trainer Taidus Vallandi came in to do some training and took the next step of hooking up the SD5 to the existing speaker system for a test run. Franco remarked: “Bypassing the copper and hearing this console over the fiber was a night and day difference. It opened everything up, like the system could breathe again. We couldn’t wait to do the install for real.”