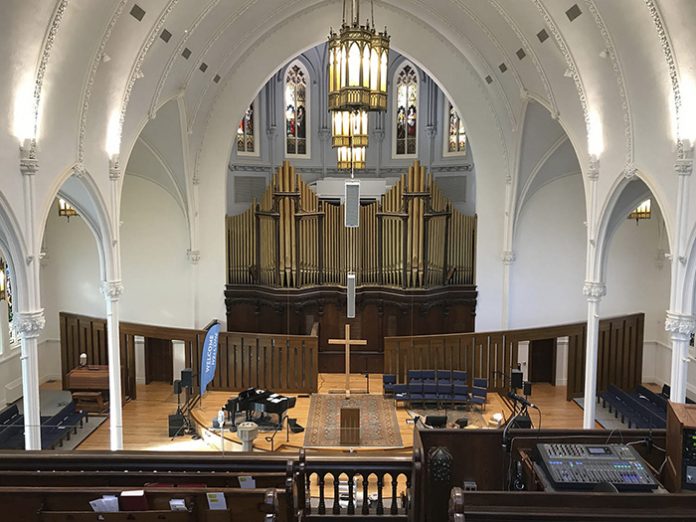 The history of Knox Presbyterian Church in Toronto, Ontario stretches back all the way to 1820, and it has been in its current building across the street from the University of Toronto since 1909. Its ornate, high-ceiling sanctuary accommodates 550 people and inspires congregants with its sublime beauty.

Unfortunately, Knox’s sound reinforcement system was nowhere close to commensurate. Poor intelligibility was largely due to a renovation that radically changed the acoustic nature of the space rendering the previous system untenable. Couple that with a transition from traditional to contemporary music forms created the perfect storm that left the church with inarticulate sound. The AV integration department at local music store Sherwood recently changed all that with a new sound reinforcement system that leverages the exceptional pattern control of Danley Sound Labs SBH-Series loudspeakers. The new Danley system keeps energy off the walls and treats congregants to crystal-clear, point-source fidelity.

“We started work on Knox Presbyterian’s troublesome sanctuary after completing several other projects that they were really happy with in other areas of their facility,” explained Craig Ritchie, project manager at Sherwood. “They had some thirty-plus year-old loudspeakers way up in the ceiling that were firing above the seating – just energizing the room, really. During the previous year, they had rented a ground-stack PA, but that came with its own issues. No one could understand anything!”

As it happened, the church officials had already heard about Danley Sound Labs and were interested in the ability of Danley’s patented technologies to deliver intelligible audio in challenging environments. Craig and his colleagues at Sherwood had installed several Danley systems, and they invited the decisionmakers at Knox Presbyterian to listen to another Danley system that Craig had designed at St. Mary’s Roman Catholic Church, in Kitchener. Although Craig arranged the meeting and demo, no one from Sherwood attended so that the members of the two churches could speak freely.

“Danley technology has provided great solutions for us, especially in difficult churches,” Craig said. “The pattern control is fantastic. We’re able to cover exactly the area that needs coverage and nothing else.” Knox Presbyterian Church now has a Danley SBH10 flown directly above the pulpit to cover the main seating area. A delayed Danley SBH20 halfway back covers the balcony in the back of the sanctuary. A pair of Danley Nano loudspeakers provide fill to either side of the pulpit. A four-channel Danley DNA 10k4 Pro amplifier, with integrated DSP and presets for every Danley model, powers the system and provided a reasonable starting point for the modest tuning that finished the job. The rest of the church’s sound reinforcement system was in good shape, and the Sherwood technicians were able to reuse existing wire runs.

“The church is thrilled,” Craig said. “They have modern, upbeat services and serve a diverse mix of ages. Spoken word fills the bulk of their services, and now, as promised, it is wonderfully intelligible. They hadn’t really expected the musicality of the system to improve since they were mainly worried about intelligibility, so they were pleasantly surprised to hear how alive and musical the guitar and grand piano sound reinforced through the new Danley system!”