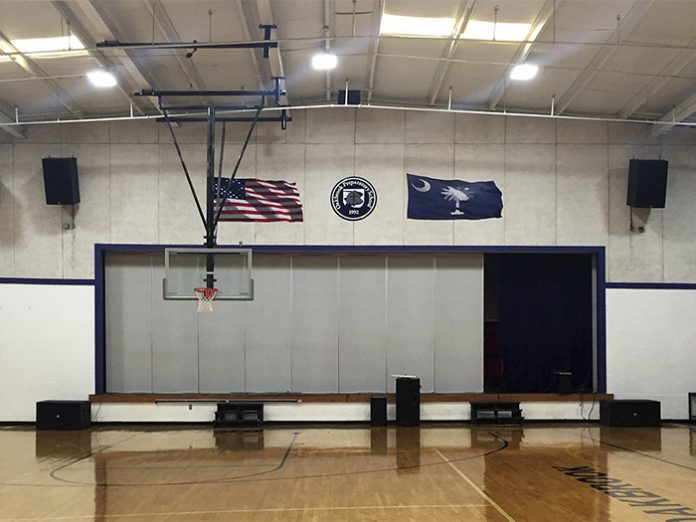 Sid Gattis from Gattis Pro Audio explained, the speakers “weren’t designed to throw as far as they were required to and there was little to no processing to help things out. Everything sounded mushy and poorly defined. The church hauled in their own monitors on Sunday, and the school didn’t even have monitors. Everyone involved wanted something that would be much, much better.” Danley’s new SM80F had been on Sid’s radar since he heard it at a recent trade show, and he knew it had the pattern control, articulation, and low-end response that would be perfect for Oakbrook Prep.

The main system is simple: a true stereo pair of Danley SM80F loudspeakers hangs above the stage and covers the entire floor. The SM80F combines Danley’s patented Synergy Horn technology, which delivers phase-coherent low-mid to high-end content, and Danley’s patented Tapped Horn technology, which delivers undistorted, musical low end. A small existing QSC loudspeaker provides twenty feet of fill just in front of the stage. “Those two Danley boxes provide a ton of clean output,” Sid said. “While we were commissioning the system – long after school had let out – we really cranked the system up to see what it could do. There was a heavy vinyl curtain basketball court divider, and we had the corners of it flapping in the wind from the SM80Fs! That’s some intense low-end energy!”

A new Behringer x32 Rack mixing system allows to mix from an iPad. A new QSC Q-Sys DSP system provides input conditioning and modest loudspeaker conditioning, along with two simple input selection presets: one for the school and one for the church. Crown XTi 2002 and 6002 amplifiers power the system. “Danley’s real pattern control keeps energy focused on the people and off the walls,” Sid said. “The top end on the SM80F is coax, and normally I think of coax as a poor choice for long-throw applications. But not Danley! The SM80Fs throw to the back of the room and the vocals sparkle no matter where you sit in the room.”

Sid installed three small Danley Nanos into the busy proscenium for the school’s monitoring. The Nano uses just one 3-inch driver inside a 6-inch cube housing. “It was a real ‘wow’ moment,” he said. “There’s no low end and nothing bone crushing or crazy, but the voice range is so articulate and silky.”