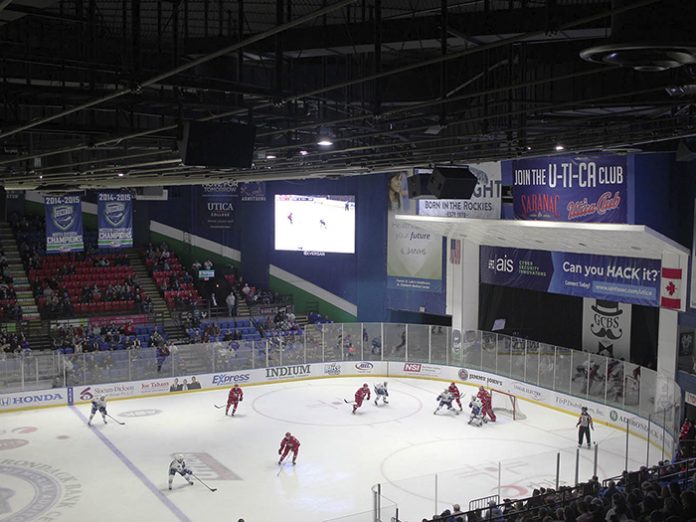 Taking in a Utica Comets hockey game at the Adirondack Bank Center at the Utica Memorial Auditorium (The Aud) in Utica, New York is not only an enjoyable experience in its own right but also an opportunity to experience a watershed moment in the history of architecture. The 3,800-plus seat auditorium relies on the world’s first cable roof system, forerunner to other such structures like Madison Square Garden.

Lev Zetlin designed the Aud in the 1950s using two-inch steel cables as circular spokes that support the roof, and its place in history is remembered with a permanent display at NYC’s Museum of Modern Art and recognition as a National Historic Civil Engineering Landmark. Pittsburgh-based sound contracting firm Edward Simon & Co. LLC recently installed a Danley Sound Labs loudspeaker and amp/DSP system at the Aud.

“From a fan’s perspective, the advantage of Zetlin’s steel rope design is perfect sight-lines from any seat in the house,” explained Ed Simon, the sound contracting firm’s manager. “There are no support columns at all. The trouble was that their existing sound system didn’t cover the entire seating area, which led to intelligibility problems.”

AVL Systems Design, of Penfield New York, designed a new system using Danley Sound Labs loudspeakers and amplifiers/DSP. Edward Simon & Co. won the bid to install it on September 1st and had the entire system in place and commissioned 35 days later, just in time for the start of the AHL season.

“We’ve worked with Danley systems before, and their unique products were certainly appropriate for the Aud,” Ed said. “Whereas many other manufacturers use an interchangeable horn that only provides directivity down to the midrange, Tom Danley’s patented, custom-designed enclosures maintain constant directivity even to very low frequencies. That puts more sound on the audience and less sound bouncing around the room, which leads to better speech intelligibility.”

Of course, anyone who installs sound systems for a living is well-acquainted with the challenges of and techniques for flying loudspeakers from I-beams and other common load-bearing structural elements. But the cables at the Aud were a special case. Ed relied on a combination of his in-house custom metal-working capabilities and yokes from Danley and Polar Focus, of South Deerfield, Massachusetts, to hang the speakers from the rope system without introducing any damage to the cables. A special adhesive prevents the loudspeakers from moving.

The Edward Simon & Co. LLC technicians installed the new loudspeakers and connected and commissioned the system in just four nights of work. “The ice was booked during the day,” Ed explained, “so we had to work at night. Working over ice has its own challenges, but at least we didn’t have to lay down plywood… If we dropped anything on the ice, they could just Zamboni it away!”

The complete system relies on a symmetric ring of Danley loudspeakers: 16 SH96s, eight SH69s, four SH60s, and four SH95s. Because Danley produces so many well-behaved boxes with the same phase-coherent, high-fidelity sound but with different output patterns, AVL was able to select each box to cover a precisely-prescribed portion of the seating area. In addition, the Edward Simon & Co. LLC technicians were able to wire the system’s eight four-channel Danley DNA 20k4 Pro amplifiers for 208 volts, single phase. “As a result,” Ed said, “we’re able to deliver full power to all the loudspeakers. They have abundant headroom and dynamic range to spare.”

He continued: “The folks at the Aud are really happy with how things turned out. Of course, the most important thing in an auditorium is speech intelligibility, and we’ve been measuring STIPA scores since the first specialized equipment became available in the early 1990s. The Aud used to have in many areas a STI below 0.5, which is poor to bad. With the new Danley system in place, its STI score is above 0.75, which is excellent. As a bonus, Danley’s excellent low-frequency and high-frequency response makes music sound much fuller and more engaging. The Aud now has exceptional sound reinforcement to go with its exceptional sight lines!”