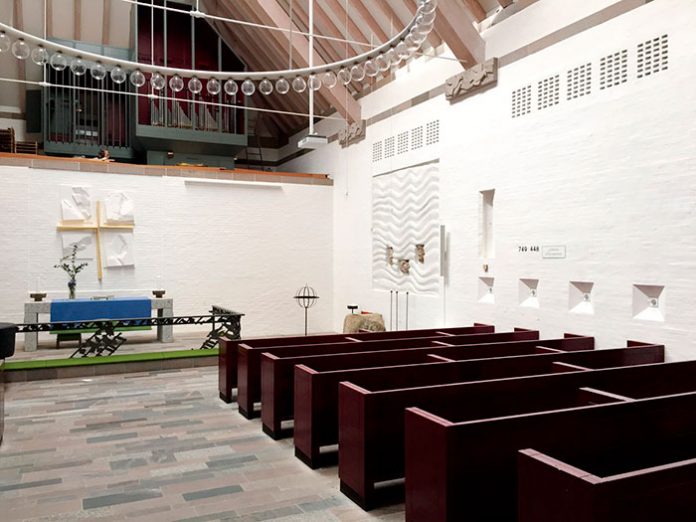 When the Kvaglund Church in Esbjerg, southwest Denmark needed an upgrade to their existing sound system, they relied heavily upon the knowledge of none other than the musically inclined priest of the congregation.

Having heard a K-Array system in use at the Holmsborg Bible Camp during the summer, Pastor Jakob Wilms Nielsen invited a dealer from Mavt to demo a K-Array system to combat the terrible acoustics in the chapel. The church was in need of good quality sound for clear speech and uplifting music.

Jan Juul Hansen of Mavt brought in the KP102 Python Loudspeaker and a twelve inch KMT12 subwoofer to test in the sanctuary. While the system’s capabilities were being demonstrated, Nielsen picked up a guitar and began playing. After the first few rifts, he was more than convinced.

“You can even hear the strings!” exclaimed Nielsen. “I’ve never heard such clearness and natural acoustics. There is no comparison”.

After the enthusiastic thumbs up from the pastor, Mavt began work to design, install and program the layout of the audio system. Since the church is divided into two areas – the actual congregation plus a small meeting room which are separated by a removable partition – two systems were installed. Two KP102 Pythons, paired with a KMT12 sub, were installed in the chapel using an invisible cable technique to cover all wiring. The system in the meeting room consists of two KP52 half metre pythons and a KU50 subwoofer inset in the wall. Both systems are powered a KA24 amplifier and are programmed to combine as one system when the partition is removed to open up the space.

The client feedback has been overwhelming and Mavt is proud of such success: “Everyone’s hands are in the air; they are so happy,” explains Hansen. “It is my personal belief that everybody has the right to good sound and K-Array helps me to provide that”.