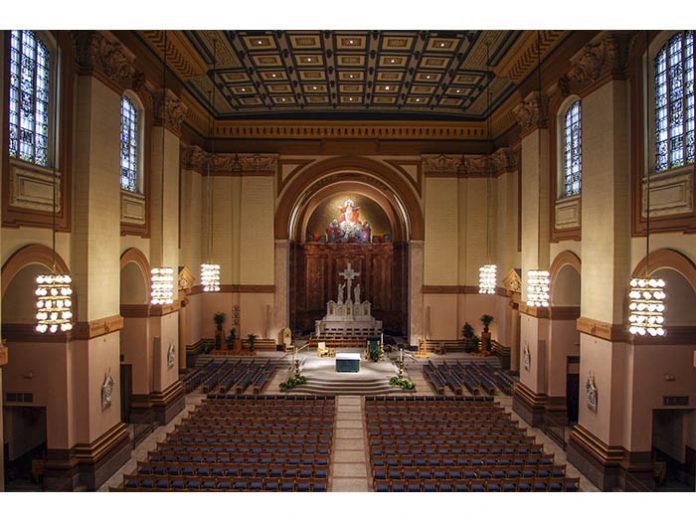 “We specified Renkus-Heinz ICONYX Gen5 loudspeakers, which are often used in large churches, but we did some unusual things in our design to improve clarity,” said IMEG Senior Designer David Wright. “We are both acoustical and AV consultants, so we’re engineers who take it further for performance but keep it all in budget without compromise.”

IMEG Designer Russ Hoppel modeled the room to confirm electro-acoustics prior to bid issue. Systems integrators ESCO Communications of Indianapolis capably installed the system as specified. A commissioning and optimization step made a key difference at the end.

Built in 1912, Saints Peter and Paul Cathedral’s rear seats are 115 feet from the front, and the ceiling is three stories high. The cathedral – first renovated by David in 1987 – featured “an old line-array approach where you stack a bunch of small-format background music speakers and put them in a metal screen with no software,” David said. “The difference between that and Renkus-Heinz steerable arrays makes clarity pop as if they are near you instead of 100 feet away.” People connect to the message and can worship better.

The cathedral’s traditional services feature pipe organ and the congregation’s Laudis Cantores Choir. The space is, of course, highly reflective, with many hard surfaces – which works well for the organ and choir but not for spoken word. “It also has a shallow transcept and a very deep dais that disconnects the natural talker source of the priest from the front loudspeaker reinforcement,” David said.

“You’d normally think a room like this would be a nightmare, but the reflection isn’t as long or as dense as you would think – the room is so big that when you talk, you’re not loud enough to power up the room reflection. When a lot of people sing, however, it’s a different story because of the very high ceiling. It is inspiring. But we had to be careful.”

When a powerful and controlled ICONYX loudspeaker “speaks” in such a space, it may excite less reverberation but it can generate very late arriving echoes, despite the pattern control a line array offers. “That’s 115 feet each way, so you’ve got a quarter-second echo, then a half second, one second, two seconds – all like a machine gun,” said David.

“The ICONYX does multiple beam steering, and can diminish its impact on many surfaces. This is what people sell. But what’s more destructive and harder to deal with is the echo it can create when it hits the back seats, and farther, the rear glass doors. So, you don’t want too much power and you must treat the room selectively for acoustics. With our predictive acoustic modeling by Russ Hoppel, we knew what to do. We say AV products are not AV solutions, but you must have good tools and good products to work with.”

For these reasons, David’s team didn’t choose matched or symmetrical mid-sized line arrays. “You get better performance out of one taller speaker,” said David. “You sacrifice in a space like this by using two shorter IC16s that increase overlap. It’s better to use the larger IC24-RN, which goes down to 250 Hz for beam control. So instead of a pair of IC16 or even dual IC24-RNs, we used one IC24-RN on the left side, and one smaller IC8-RN on the right, to reduce late echo and conserve the budget.” Adding empty Renkus-Heinz enclosures makes the IC8-RN look like a second IC24-RN, so the two still appear aesthetically symmetrical. There was better control and more imaging with less power plus a lower budget.

Beam width was another consideration. “With all line arrays, the dispersion is so wide that it’s hitting the closest available nearby or side surface, too,” said David. “It’s actually most powerful when it hits the near side wall because it’s so close. If you don’t account for that, you’ve got another machine gun echo.” To deal with the wide side lobe reflection, David’s team designed a 4-inch-thick stretched-fabric acoustical panel to trap sound that would otherwise create destructive reflections. This pinpoint acoustical enhancement saved the day but kept the space live for worship and allows Renkus to work even better.

David’s team also “localized” the main speaker in the software, so the IC24-RN on the left handles the left podium, where the talker is. “The talker position is where you need the beam control to get every dB of clarity you can for speech intelligibility plus feedback control. We used modeling and chose an IC24-RN for the beam control on the talker side to lower feedback risk,” said David. “This is our trademark, and ‘localization’ or imaging to the source is as important as complete coverage. The industry doesn’t use this technique often enough.”

The smaller IC8-RN on the right predominately handles the cantor/podium. “The cantor sings a long legato that’s easy to reproduce, so you don’t need the precise control of the larger array as the lead for worship, and you can turn that cabinet down, too,” said David.

“In addition to conserving the budget, choosing the smaller IC8-RN instead of a second IC24-RN minimises excess energy and still localizes to the cantor. Yet the ICONYX system still covers the entire space. Instead of echoes and overlap issues produced by dual high-powered speakers,” said David, ”the distant rear seats are now some of the best seats in the house.”

A Biamp Tesira DSP handles the system processing for localization, and image. “You can’t do this sort of imaging in the loudspeaker digital software alone,” David said. “Further, the cantor is right in front of the speaker (a clear challenge), AND standing over two feet away from the mic – but with no feedback after commissioning. You can’t change laws of physics but you can optimise them.”

As for mounting, “you cannot secure a loudspeaker to the Italian marble of a cathedral,” said David. “But sophisticated loudspeakers have to be almost perfectly placed. So ESCO devised a neat, separate steel base and spine. The speakers were then custom painted to match the rose-striated Italian marble, which effectively hid the prominent front speakers and steel base.”

“The entire project is a resounding success,” David said. “Renkus-Heinz has a proven solution, but you have to do more than just stick the loudspeakers in a room. Catholic liturgy and architecture is demanding. With the Saints Peter and Paul Cathedral sound system, you get the tall ICONYX beam control and the shorter IC8-RN on the other side to balance out – yet it’s visually appealing, and it sounds great.

“We chose Renkus-Heinz ICONYX because it’s the best solution for this room, and support received from their local representative, Jay Dill of McFadden, was top notch. This cathedral will benefit for decades.”