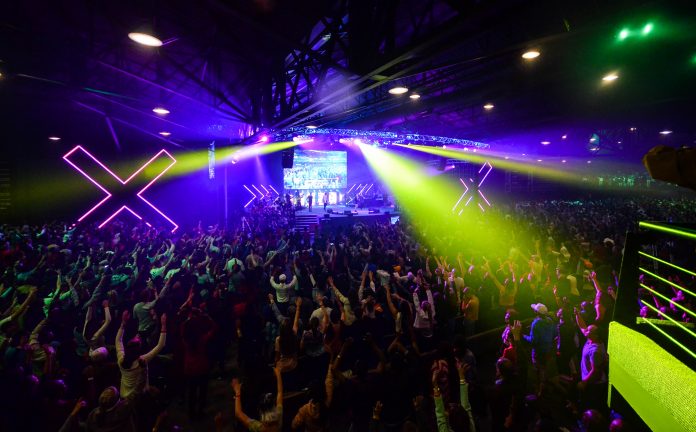 With the CRC’s Dreamweek Explosion hosted simultaneously in Bloemfontein and Pretoria from 3 to 6 October 2017 and over 14 000 people in attendance daily, DWR Distribution had a tight deadline to ensure a new lighting installation at both venues was complete in time for this annual life changing conference hosted by Snr Pastors At and Nyretta Boshoff from the Christian Revival Church (CRC).

Phase 1 of this upgrade saw CRC Bloemfontein’s Main Auditorium receive a huge facelift. CRC is committed to establishing a functional building to reach out to more people and the 5 000-seater Auditorium situated in the South of Bloemfontein, was extended to accommodate an additional 1 200 people. The ceiling was removed, air conditioning installed, and a new 24m wide stage, more than double the size of the original stage, was built.

The DWR team, headed by Robert Izzett, installed Prolyte H40V trussing above the revamped stage onto which both the church’s existing lighting fixtures and the new LED power saving units comprising of 18 Robe Spiiders, 6 Robe Pointes and 28 LED Parcans for audience wash were hung. An 8 Port Node was added to the MA system.

A 3.9mm Absen LED screen made up of 144 panels and measuring 8 x 4,5m, was erected on stage. Also on stage ,70 Absen LED panels to form two side screens. Over and above this, additional Absen LED screens were positioned on stage on custom made floor brackets, designed and manufactured by DWR’s Rob Young and Keith Pugin.

At CRC Pretoria, a 90m curved Prolyte truss was erected above the auditorium, midway through the venue above the gallery line, onto which 48 Robe LEDBeam150s and 18 LED Parcans were positioned. “It looked absolutely amazing,” said Robert Izzett. A 4 Port Node was added to the existing MA System.

On stage, to match the auditorium in Bloemfontein, 70 Absen 3.9mm panels were erected on floor brackets manufactured by DWR.

“It’s always an honour to work at CRC,” said Robert Izzett. “Although we faced many challenges, delayed shipping and port congestion, thanks to the great team made up of both CRC Media and the DWR install crew, we just managed to pull it off, despite the tight time frame.

These projects executed in excellence, contributed to yet another outstanding Dreamweek as CRC impacts nations through their vision and literally shine to make a difference.