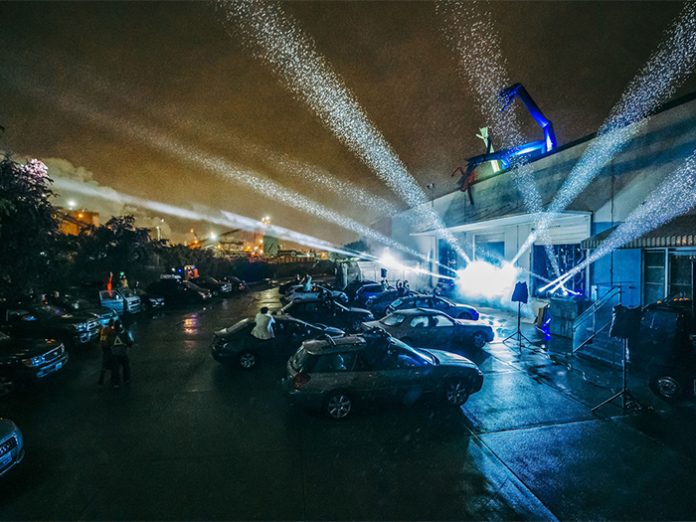 The wonderful world of entertainment technology is renowned for those who can think out-of-the-box … and this pandemic is seeing no end of creative and imaginative ways in which people and companies are trying to boost morale and support the soul of live performance!
Seattle, USA-based Joe Cole, owner of lighting rental company R90, was savoring some good conversation and a whisky-on-the-rocks over Zoom with his friend, attorney Neil Juneja of Gleam Law one Wednesday evening, and like most of us, missing shows, music and the incredible buzz and camaraderie of live events that has temporarily evaporated under lockdowns worldwide.

Musing about drive-in music events they had seen happening in Denmark, Germany, and other European countries … Joe and Neil had a flash of inspiration! The Seattle Governor’s office had just issued a special guideline allowing drive-in religious services to commence in Washington State!

The next day Neil started drilling down into the stay-at-home laws and the new directive, discovering that “religious affiliation” is a term open to dynamic interpretation in a court of law, so they decided that a drive-in religious service offering the ‘gift’ of music did not actually contravene any current laws. Thus the Covert Bat Drive Thru Rave was born.

Neil actually engaged in substantial and thorough legal due diligence which included communicating with countless city, county, and state officials. A few days into the mission, no-one had a problem with the proposed project or could find any legal reason for it not to go ahead.

The venue for the initial Covert Bat Drive Thru Rave – a smart scientific nod to the “noble winged mammal” in combination with the true spirit of underground rave that kept the first events strictly secret – was R90’s shop on 1st Avenue South, Seattle.

This has a large loading bay area and a series of roller shutter doors where trucks back up to load gear and sufficient room to socially distance 21 vehicles so they could have the windows down.

Then Joe, lighting designer Erik Mahowald from Bending Lite Productions and Christian Jackson, lighting programmer and another R90 regular who owns a lot of sound kit – started thinking about the music and production.

Erik’s lighting design was based around how to fill three loading dock bays with flexible lights that would work from the available power supply. All the kit including the sound system – supplied by Christian for the first events – had to fit inside the bays, so they could simply flip up the shutters – improv style – and let the fun begin.

With a warehouse full of lighting gear and determination to produce something special for what would be the first proper show since the industry shut down, Joe, Erik and Christian measured the bays, built the venue as a 3D visualization model and chose lighting positions in a stunning design that “looked great and fit the limited parameters,” explained Erik.

This included 15 x Robe MegaPointes and 27 x LEDBeam150s on the lighting rig. The MegaPointes were deployed on the downstage edge of the stage in the central bay for an even spread across the loading dock area, with one more fixture far back inside each bay for high-impact backlight looks and silhouettes.

Erik loves MegaPointes, especially the gobo and prism combination that “hits the outer aperture of the fixture to create amazing full looks and intense aerial effects as well as great eye candy,” and R90 has made some large Robe investments in the last couple of years.

Three lighting towers were deployed, one in the center of each bay, each rigged with 9 x LEDBeam 150s, and six additional fixtures, with all lights controlled from a grandMA3 console.

The first Covert Bat Raves were electronic and EDM-based, so this selection of lights gave endless options for creating multiple big, bold, bright, diverse looks that kept the energy pumping out and immersing the parking lot in the show.

A lineup of top-level local DJ talent included Darrius, Pezzner, Subset and Powermitten covering a range of EDM genres and creating superlative music, vibes, and a thrilling experience for everyone.

An experimental acoustic set with singer / songwriter / guitarist Glen Cannon enabled them to ‘test drive’ a different genre, and Joe notes, for this set up in general, DJ’s and acoustic sets are more practical for social distancing and to load in / out than full bands would be!
This also leaves the possibility of presenting music lovers and artists with some truly unique solo performance opportunities!

The first Covert Bat events – in tune with the heartbeat of the underground – were promoted only by word of mouth, a move to keep them cool and peripheral on one hand but also for several sensible reasons including safe delivery and, with that in mind, keeping it legal for everyone’s protection .

DJ sets for the first raves were limited to 50 minutes because if people stepped out of their cars without being home or on an ‘essential’ journey they immediately broke the lockdown regulations.

There were no limits to the number of people per car – provided the vehicle had the corresponding sets of seatbelts – and the occupants had to be from groups or families who were directly quarantined together. Masks and face coverings were also compulsory.
In keeping with religious service customs, audience members could make ‘donations’.
The concept was a massive success, many faces smiled, word soon spread, and the events were hugely appreciated by a live music starved audience.

While Joe and his R90 team are experienced lighting and production professionals, they are also the first to admit that promotion and ticketing is not their forte, so going forward they have now teamed up with some local promoters and started upping the scale and organization of the events and sourcing larger venues.

The aim for the immediate future is to continue spreading the great vibes on a slightly larger scale whilst maintaining the special essence that has seen Covert Bat evolve as an alternative grass-roots musical movement of the moment.