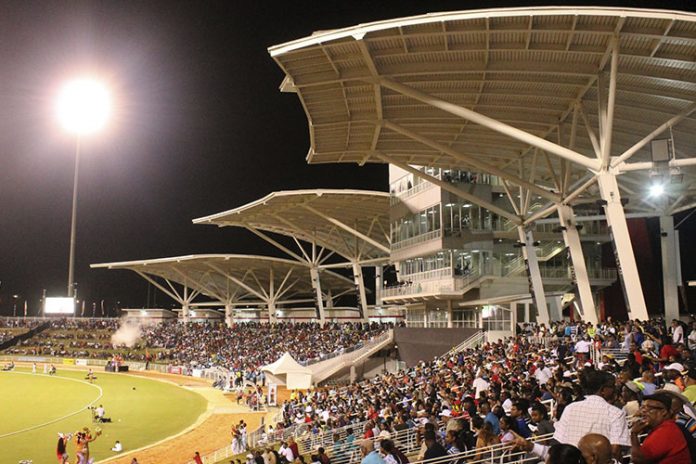 Inspired by the record-breaking batsman Brian Charles Lara, many young cricketers in Trinidad and Tobago dream of playing their national sport at international level. This dream has been brought a step closer to reality for many by the Urban Development Corporation of Trinidad and Tobago Limited (UDeCOTT) with the completion of the Brian Lara Cricket Academy, a state-of-the-art competition venue and training facility for the development of world-class cricketers.

Just north of the city of San Fernando, the Brian Lara Cricket Academy is the first state-of-the-art cricket training facility to be constructed by the Government of Trinidad and Tobago. The Academy includes a 15,000 seating capacity stadium, club seating, lounges and executive boxes as well as exhibition space. The equally impressive field comprises a quick-drain professional grade cricket pitch and a 70-metre radius playing field, encompassing six pitches on the main playing field. The Academy also incorporates 12 outdoor practice pitches, official and team locker rooms and a gymnasium.

A request for quotation for the audio systems for the new venue was released in May of 2016 and the directors of Streamline Systems, who had worked on four other stadia in the Caribbean, were quick to respond. With a window of just one month to audit the stadium and design a modern system to meet the Academy’s needs, the team went straight to work.

To get the design done on schedule, Streamline Systems’ directors Michael Pereira and Clifford Beckles met with the client to ascertain the requirements and to make their own recommendations based on their industry experience. Streamline Systems was assisted by Community’s Technical Applications Group (TAG), who supported the short timescale by reviewing EASE plots, direct sound pressure level mappings and auralisation files as needed.

After several meetings and presentations with the client, Streamline was awarded the contract with a strict deadline of 110 days for completion and commissioning of the system. Considering the manufacture of all components, shipping, customs clearance, installation, testing and commissioning of the system, this would have been a tight deadline but, to make matters worse, the original system then had to be completely redesigned. The original proposal was for a distributed system, using the leading edge of the canopy trussing to fire back to the seating areas, but this was deemed a problem due to lack of catwalk access.

Streamline Systems, again supported by Community’s TAG team, worked fast to design a new system that would meet both the original requirements and the 110-day deadline. Still following a distributed configuration, the loudspeaker locations were all moved to positions behind the listeners where access was more practical for the installation and maintenance. Care was taken to ensure that coverage was optimized for the new locations and that audio projecting across the playing field was kept within acceptable levels.

This final system required more, but smaller, cabinets than the original design and the team selected Community’s R.5 and R.35 loudspeakers for the mainstay of the system. A total of 120 R SERIES loudspeakers were used for the spectator and playing areas of the project, with a further 52 C SERIES ceiling loudspeakers for the indoor areas.

Community R6-51MAX loudspeakers were chosen for the long throw from the main stands over to the grass areas, which also required coverage. “The R6 packs six 12-inch for LF, six two-inch for MF and six one-inch for HF, with a total power of 4,710W,” commented Michael. “That really gets the power across to the field with excellent pattern control to below 100Hz.” A total of 16 Community R2SUB subwoofers were used for low frequency reinforcement for the system.

Manufacture of the speakers was started immediately by Community while 45,000 feet of cables were airfreighted to Trinidad so that work could begin onsite.  Streamline turned to Electro-Voice for amplification and audio processing. With the stadium split into a North and South stand, two Electro-Voice NETMAX N8000 units were linked to allow for crystal clear audio over the OMNEO/Dante network. Linking of the two units was done over fiber optic cable and a Cisco managed network.

Basic system control is done using EV’s TPI-5 5.7-inch touch screen controls which allow each stand to be turned on and off independently, with more advanced control via a full-sized touch screen computer. This feature is facilitated by 10 Furman ASD120 sequential switchers with 5 per rack location, which means that each amplifier rack can be switched on via the touch screen units without having to be on the other side of the facility. While the stadium was outfitted with a standard fire alarm system, Streamline took the audio system a step further with automated system override and voice evacuation.

The full-size touch screen computer allows the system to be zoned so that the end user can turn on and off an area at will, depending on how each area is being used. Additionally, a few spare inputs and outputs are available allowing for further scalability of the system should the need arise. 3-phase voltage monitoring was included so that the user would be able to monitor system line voltages locally to further ensure longevity of the system.

A simple analog mixing unit was used on the front end of the system. Michael explained the reasoning for this: “There was method to what some may construe as madness. This was done so that basic operation of the system would be very simple for the end user or commentator as need be. A much larger and more robust feature set is available via the touch screen computer but not all operators would need to utilize this set on a regular basis, as such a much simpler interface was provided for day to day use.” Professional grade Shure wireless microphone systems were used to allow for free use of the wireless microphones throughout the playing field by officials and commentators alike.

Michael concluded: “Every detail was put in place to ensure that a fully operational system was delivered to the client and this was fully achieved, while keeping 10% below the agreed contract sum and on time. The Community loudspeakers provide outstanding intelligibility and uniform coverage and the system combines excellent flexibility with ease of use.”