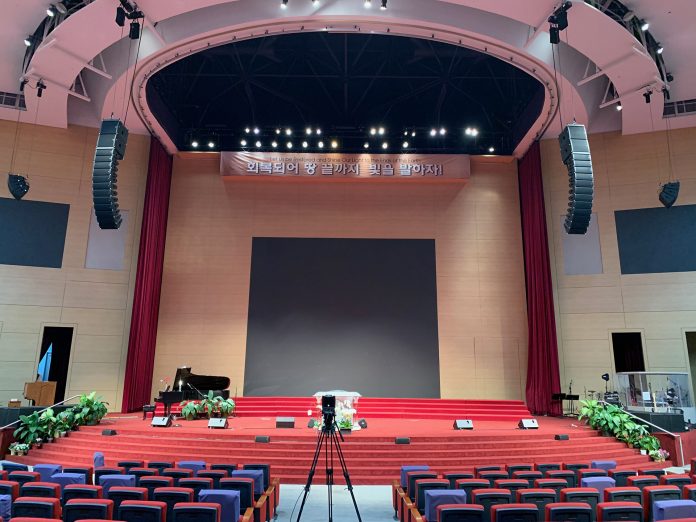 Troy Choi is a next generation audio professional. More than an engineer in traditional terms, this talented and dynamic practitioner’s working life is immersed in sound. From running monitors for rock giants Toto, through mixing an orchestra, choir and jazz ensemble on the touring production of the LaLa Land movie, to helping to design fixed-installation audio systems with his Solid Sound Solution company, Troy covers all bases. Having worked hands-on with every leading brand available, Troy’s attitude to sound production is focused less on the box’s name and more on the experience of the audience. In his estimation, whether it is a concert hall, festival field, conference centre or house of worship, the job in hand is aimed squarely at ensuring that the communication between the stage and those gathered in front, is the very best it can be. In pursuit of excellence, Troy leaves no stone unturned, and last year, when he was approached by the Grace Ministries Korean church in Los Angeles to upgrade its sound system, a conversation with a trusted old friend led him to the demo facility of CODA Audio USA.

Grace Ministries International is one of the biggest Korean churches in the USA, with more than 8000 members. It is influential amongst the more than 4500 Korean churches in the USA, as well as having a wider international reach. As a member of this strong and close community, Troy’s expertise and experience is highly valued, and Solid Sound Solution’s portfolio includes a number of church installs which have cemented his reputation as a go-to figure for advice on all matters audio. When Grace Korean Church in LA were not satisfied with their audio system, it was natural that they would engage with Troy, and having done so, would take his recommendations very seriously.

A conversation between old friends got the ball rolling. Troy and Steve McNeil of the Mac West Group have been acquainted for more than ten years, and whilst discussing system possibilities for the job, Steve urged Troy to take a close look at CODA Audio options. Mac West is CODA USA’s representative for Southern California, Nevada, Arizona and Hawaii, and two very productive years into this partnership, the signs point toward a very bright future. Trusting in his friend’s knowledge and ear for quality, Troy kept an open mind:

“The church had become increasingly unhappy with its existing system for a number of reasons, so the decision was made to go for a replacement and I became involved. Steve is a long time friend of mine and he was saying to me you’ve GOT to listen to this CODA stuff, and I’m thinking, ok, let’s hear it then. He was talking up the new N-RAY system and to be honest when I first saw it in the demo room, I was pretty skeptical. I thought I was going to need bigger boxes than that – the church is maybe 3500 seats, so it’s a big space. Anyway, I took some familiar tracks with me that I use for sound-checks and put them through the system without EQ or processing and that was it. I knew right there that this is one cool sound system. The power and clarity was off the scale.”

Realising that he’d found exactly what he was looking for, Troy spoke to the Pastor at Grace Church and suggested that they break with tradition and opt for CODA. Trusting Troy’s judgement, the Pastor agreed. Convincing other influential leaders in the church, whose understandable instincts were to favour a more widely know brand, might have proved more difficult had the chance to demo a N-RAY system in situ not been available. Luke Jenks, Managing Director of CODA Audio USA arranged for a demo N-RAY system with subs to be delivered to the church:

“We sent down the N-RAY system to the church, and keeping in mind that this was all happening with certain COVID:19 restrictions prevailing, we created some bespoke videos to assist Troy and Steve with executing a successful demo.”

Troy takes up the story again: “We set up the demo rig on a Friday morning in advance of the evening service and I could see that a few people in the church looked a little doubtful, given the compact size of the system. We just played some tracks and kept things pretty low key. When it came to using the system for the Friday service, all the doubts melted away. Everybody was super impressed – and remember, this was just a demo rig!”

Any audio system chosen for a house of worship has to display a level of versatility that often exceeds that required in a single-use space. The spoken word and a wide dynamic range of live and background music tests the adaptability of a system to the full. Musical performers might be seasoned professionals or inexperienced amateurs, spoken-word presenters will possess similarly varied skills and styles, so the consistency of input signal levels can vary dramatically. It is essential that as far as humanly possible, the sound engineer in this setting has the tools at his disposal to cope with such variety. CODA’s work on developing precisely the technology to meet the challenge of achieving high power with strong intelligibility is perfectly represented in the N-RAY product. CODA’s patented Dual Ring Diaphragm high frequency delivery devices enable the design of scaleable solutions by simply combining the desired complement of sensor-controlled mid bass and subwoofers to achieve the required headroom over frequency.

Achieving these benefits from enclosures that are significantly smaller than those of similar power, adds another attractive feature. Less in the way of physical presence means better sight-lines – this was an important consideration, as the Church was also upgrading its screens. The demo at Grace Church was a great success, as Troy describes:

“The Pastor at the church is a very quietly spoken presenter with a soft voice – in the past the congregation sometimes had difficulty hearing him. After the Friday Service demo, many people came and spoke to me about how clearly he could be heard – they were delighted with the improvement. Everybody present was very impressed and the decision to install a CODA system was confirmed unanimously.”

At this point Troy began to consult with CODA Audio USA’s Technical Director Michael Creason. Like Troy, Michael can be described as a next generation audio professional. Vastly experienced in the design and installation of cutting-edge systems into often difficult and challenging spaces, Michael is fundamental to CODA’s growing reputation in the USA – combining the talents of these two highly respected experts took the audio at Grace Korean Church to a new level.

Michael created a system based around CODA’s new N-RAY product (with SCN-F sensor controlled bass extensions), complemented by APS, N-APS and SCP subwoofers, to obtain complete coverage of the space. Familiar with the idiosyncrasies of the building, Troy was able to offer insights that finessed the final design and helped to overcome some acoustic challenges presented by the architectural geometry of the space. A selection of HOPS5 and HOPS8i were deployed for monitoring.

Michael Creason describes the approach: “The system we were replacing was pretty big, and the previous approach to the seating geometry was to have four highly overlapped line sources. Whilst this delivered plenty of headroom, the system had problems with coverage. Side-seating areas were inconsistently covered – loud in the inside, almost nothing on the outside, the middle section suffered from overlap from the outsides, with the upper corners too far from the mains to work well without a delay.

“We needed to create a high-headroom system which allowed for customization in the coverage of the vertical and horizontal, which took care of the complex angular sections, whilst simultaneously blending together predictably and consistently.”

In the face of such a complex geometrical challenge, it is vital to have a method of evaluating the coverage of individual system components, and how they combine with each other relative to the seating. The team deployed CODA’s System Optimiser to quickly create the initial design and then moved forward modifying and adjusting fine details as necessary. Michael continues:

“The entire main floor and most of the balcony are serviced by a left/right N-RAY/SCN-F configuration, positioned such that the low mids are distributed as evenly as possible across the seating whilst giving the stage maximum rejection. The side seating sections are served by outfill arrays of vertically splayed APS, whilst the upper side sections – extreme upper corners of the balcony – have a vertical array of N-APS that functions both as a delayed fill for the outfills, and an extension of the mains in the upper side balcony. The mains and outfills really have separate roles in respect of mid high energy distribution, whilst needing to work together in the low mids. All of the arrays have graduated horizontal coverage within the array that matches its corresponding searing shape, achieved by means of CODA’s customisable coupler technology. The subwoofers are arranged in a splayed end-fire configuration which has three principal advantages. First, there is a high amount of broadband low frequency rejection on stage which keeps low frequency energy out of onstage microphones. Second, there is wide coverage with minimal ‘power alley’ effect, and third any aesthetic impact is reduced by the subs being effectively hidden by stair handrails on each side.”

With the completed installation only days old, and following the universal approval of the congregation, Grace Church played host to a major Prayer Union event which featured a number of pastors from other churches. If any confirmation was needed that a CODA Solution had been the correct decision, it came in the form of a number of enquiries after the event from the visitors. Just how Grace Church had reduced the physical size or its audio system whilst simultaneously increasing its power and improving its clarity proved a hot topic of conversation…

Troy Choi sums up: “The system is fantastic, and everyone at the Church is very happy with the choice (especially the Pastor’s wife!) I’ve been doing some training with the technical guys at the Church so that they can use it to maximum effect, and they too are seriously impressed. I would also add that I’ve worked with a lot of big companies on major audio projects, but the level of service and engagement I’ve had with CODA Audio USA has been remarkable. I’m so happy that Steve McNeil at Mac West persuaded me to take a listen – during every part of the process, I felt like I was dealing with genuine audio people who were passionate about achieving exactly what we needed.”