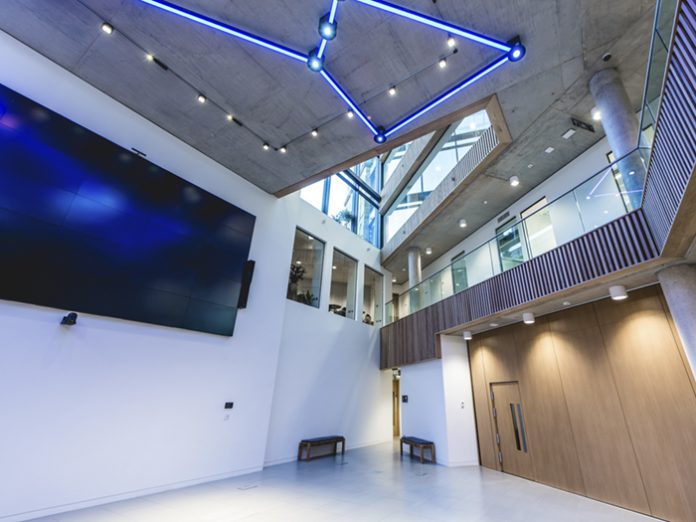 The Institute of Physics (IOP) is a place where physicists come together to share their knowledge, solve problems and drive themselves and the subject of physics forward. The institute’s recent move to a new facility in King’s Cross, London marked an important chapter in the history of the IOP as the new location “is going to transform the way the IOP works and how it supports the physics community,” according to the institute’s website.
An important part of this plan is the new building’s basement auditorium and exhibition gallery, which are both open to members and now prominently feature solutions from ClearOne (NASDAQ: CLRO), the leading global provider of audio and visual communications solutions.

Paul Marshall, Senior Technology Consultant at Recursive technology consultants, designed and specified ClearOne’s WS800 Wireless Microphone System in the basement auditorium, council chamber and divisible meeting spaces, along with 12 ClearOne Unite 200 PTZ cameras across various meeting rooms in the new facility — all of which will play a pivotal role in the institute’s future training programs, presentations and conferences. They were chosen specifically because their encryption which protects the networks in the crowded RF (radio frequency) area near King’s Cross station, London.

“The institute wanted to be able to record, present to the audience and stream these training sessions and presentations for future use so audio quality was a huge factor,” Paul said regarding the choice to go with ClearOne’s WS800 wireless system. “The system needed to be able to clearly capture all the audio and make sure it was encrypted to avoid interference from surrounding facilities like the King’s Cross railway station right next door.”

ClearOne’s WS800 is a full-feature wireless microphone system with Dante™ technology, offering a uniquely scalable solution with multiple options for microphones, redundancy, and connectivity. The security issue Paul referred to is assured with the highest level of encryption, and a range of transmitters are available to suit every application.

Paul also specified the Unite 200 PTZ cameras in the third-floor conference room, citing their versatility as a key element.

“There is going to be a wide mix of users for this system,” Paul explained.”Some users who might prefer that sort of white-glove conference service, where everything is set up for them, is done via the resident PC’s in room, and other users who would rather plug in their laptop and use their own soft codec for conferencing by simply plugging in, the camera automatically switches to the users laptop. The Unite 200s were a great solution here due to their flexibility that includes USB, HDMI and IP connections.”

The third-floor conference and council rooms will also handle overflow when the auditorium reaches capacity and Paul explained that the Unite 200 solutions will work as broadcast-style cameras located at a high level enabling post-conference Q&A sessions back-and-forth between the two spaces. This provides a complete view of the audience in that room for those in the auditorium,” Paul added.

The auditorium features an 11-meter wide projection screen and opens up into a three-story high atrium space that is used as an art gallery for exhibits and events.

Along with the high-quality audio and video recording Recursive has come to rely on from ClearOne, Paul added that the tech support they provide is an essential part of the equation as well.

“Since we started working with ClearOne the timely and reliable tech support and other general support we receive has been a huge part of the partnership and something we truly appreciate,” Paul said.