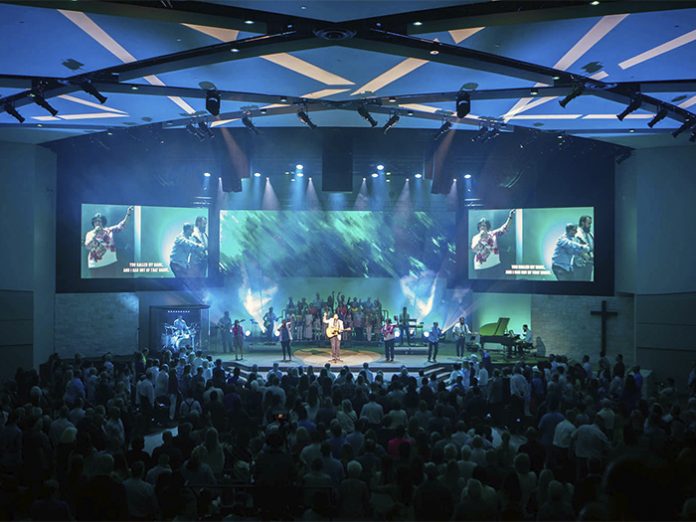 Champion Forest Baptist Church’s steady expansion over many decades has recently accelerated, inspiring the launch of satellite locations around its central Houston, Texas location. CFBC’s services are decidedly contemporary, with an energetic praise and worship band that’s unleashed at inspiring volumes and supported by full production video and theatrical lighting. Instead of receiving a simulcast from the central campus, each CFBC satellite has its own live pastor. The pastors at the different campuses work together to deliver a common message on a given Sunday. Based on their timely and professional work in the past, integration firm, Clair Solutions, installed the AVL systems at CFBC’s newest, 800-seat, satellite location as well as the student building in North Klein, Texas.

“We put in a new line array system manufactured by our sister company, Clair Brothers, along with a new DiGiCo console at CFBC’s main location many years ago,” explained Mike Mason, regional vice president at Clair Solutions’ Dallas office. “The Texas-based AVL consultants at Idibri designed that system, and we’ve worked with Idibri on numerous other successful projects in the Texas region and around the country. The folks at Champion Forest were really pleased with how that job came together, got exactly what they needed at a fair price, and it has continued to serve them well. They launched their North Klein location a few years ago by initially renting space in a school. When it grew to a size that justified its own building, CFBC again hired Idibri to design an awesome AVL system and Clair Solutions to make it a cost-effective reality.”

CFBC worked with the architect to open the doors on the North Klein sanctuary with 800 seats. Once that capacity is regularly filled, the design makes it relatively easy to add raked stadium seating in the back that will nearly double the capacity. In anticipation of that eventual reality, Mason and his team pulled wire and prepared the infrastructure to make it easy to install delay speakers in the future. In addition, the North Klein location includes a separate student building with a main meeting room that can be subdivided with an airwall into two independent spaces. Clair Solutions worked with Idibri to make the second AVL system in the students’ main meeting room a useful “delay” when the full space is being used and to make the combining/separation intuitive to manage even for non-technical staff.

The main audio system at CFBC’s North Klein location is a Clair Brothers stereo line array with eight C8 elements per side and a directional low-end array composed of Clair Brothers CS18 and CS218 subwoofers. Eight Clair Brothers kiTCurve12 loudspeakers provide side fill. Lab.gruppen amplifiers power the system with system-level processing and routing logic provided by QSC’s Q-SYS platform. A DiGiCo S12 console with two D2 racks mixes the house and monitors, with additional musician-level control from a Livemix personal monitoring system. Shure wired and wireless microphones provide clear, articulate audio at the front of the signal chain. The use of MADI and Dante protocols allows for an entirely digital system.

The video system consists of Hitachi Z-Series and Sony PTZ cameras providing image magnification to the two custom 18 by 10 foot Absen LED screens located on either side of the stage. Camera operators and other technicians communicate with a Clear-Com system. Two Absen LED screens hang side-by-side to create a massive 36 by 10 foot display that raises and lowers at centre-stage. The screen provides graphics and lyrics from an intermediately-raised position when the band is playing. Cleverly, the screen lowers all the way down during a sermon to hide the abandoned instruments and band paraphernalia. In that role, the centre screen can show relevant imagery or tasteful designs or colours. A Blackmagic ATEM system handles video switching and routing, and CFBC uses Renewed Vision Pro Presenter for lyrics and Renewed Vision Pro Video to run content. All distributed video uses SDI.

Lighting is a mix of ETC conventional Color Source Pars & Color Source Ellipsoidals, Martin moving fixtures, and Chauvet LED strips. An ETC Sensor IQ works with all the lighting (there are no dimmers in the building whatsoever), and an ETC Paradigm system provides all control in conjunction with an MA Lighting GrandMA3 during a service. The Paradigm system includes “snapshots” of the lighting that can be recalled for simpler events that don’t require a lighting operator.

“Although Clair Solutions is also an A-list design firm, in this case, that was Idibri’s role,” Mark said. “They wrote the recipe; we bake the cake. That said, we did bring our design experience and deep history in live event productions to make the installation as efficient and effective as possible.”

“We couldn’t be happier with the professionalism, expertise, and wisdom that Clair brought to our project,” added Chris Todd, Pastor of Operations, COO. “Their understanding of our end goal along with flexibility and willingness to innovate make them pure joy to work with. We’ve had the pleasure of working on several projects with Clair and we continue to be impressed with their entire team and process-driven, customer-first approach to integration.”