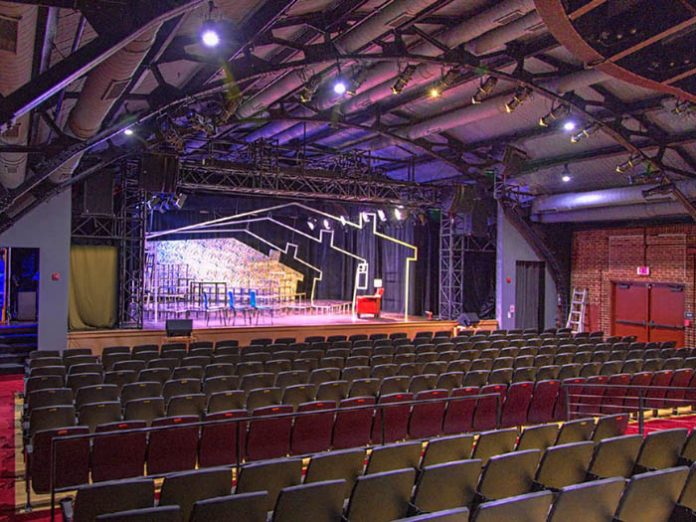 The Uptown! Knauer Performing Arts Centre began as an inspired vision to create a civic and cultural polestar in the western suburbs of Philadelphia, Pennsylvania. The vision gained traction with the purchase of an old armoury in West Chester that held the promise of conversion to a three-hundred-plus-seat theatre. Although the founders had the artistic and civic experience to realize their vision, they didn’t have the requisite audio-visual technical know-how.

They brought in national AVL design and installation firm Clair Solutions from nearby Manheim, Pennsylvania, whose team of experts worked with the founders from early conception to finalized design and from installation through commissioning and beyond – including help with the first several events. Because the roof structure of the old armoury could not support additional weight, Clair Solutions also designed, fabricated and installed a customised ground-support truss from which to hang all audio, video, lighting, soft goods and scenery support equipment at Uptown! Knauer PAC.

“When we first got started, the Armoury was still a functioning national guard building complete with relics of 1960s cold war America, including an ammunition vault in the basement and fallout shelter signs,” recalled Bill Simmons, a senior lighting designer with Clair Solutions. “The founders wanted to convert it into a bustling theatre that could stage plays, opera, comedy, dance, TED-style talks, meetings, and musical performances, including classical, jazz, Latin, and rock. However, they relied entirely on us to help conceptualize, design and install the technical audio, video, lighting, and rigging systems that would make all of those different kinds of events possible in this boutique venue. Moreover, we had to make it happen on a budget, so everything was carefully coordinated and demoed to make sure the venue would be getting the best possible performance and flexibility for the cost.”

The building’s roof is barrel-shaped and was designed to support its own weight and the weight of a heavy Pennsylvania snow, but not much more than that. To turn it into a performance space, Clair Solutions engineered a ground-support truss system. The truss starts with new concrete piers poured in the basement with columns rising up to connect with the theatre floor above. From there, the truss rises up on either side of the stage and forms a proscenium arch. It’s bolted to both side walls and the upstage wall. “We used a spigot Eurotruss design with custom pieces and had it fabricated overseas,” Bill said. “Then we assembled it in place. That truss is really the key to making Uptown! Knauer PAC a performance space.”

The truss can support up to 8,000 pounds, of which 5,000 pounds is already spoken for with lighting and scenery, a video screen, custom curtains, lighting fixtures, loudspeakers and subwoofers. Lights include distributed Elation SixPar 200, SixPar 300, and TVL GYC RGBW LED fixtures. All ellipsoidals are either ETC Source 4WRD or ETC Series 2 Lustr, and lighting control is handled by an ETC Element. The venue’s high-fidelity PA system comes from Clair Brothers. It includes their CAT115 line array elements with low-end support from two CS218 subwoofers. QSC CXD-Series amplifiers power the system, with DSP from a QSC Core 100f. A Yamaha TF5 digital console commands the audio system, with an instant recall for easy transitions between the various groups who use the space.

The video system had to be similarly flexible and ready for everything from digital signage to PowerPoint presentations to high-definition video. A Barco RLM-W8 projector paired with a motorized retractable Da-Lite screen allows for optimal video screenings and ably serves all of those needs. The fact that the screen can go away when it isn’t needed opens up the full range of aesthetic possibilities for events that don’t use video. Danny Olah, a video system designer with Clair Solutions, gave Uptown! Knauer PAC video-over-IP solutions from Just Add Power to build a system with a modular number of transmitters and receivers.

Gary Green, past president of the Uptown! Knauer Performing Arts Center, enthused: “We were a group of engaged community members with a big dream. Clair Solutions made that dream a reality at the highest calibre.”