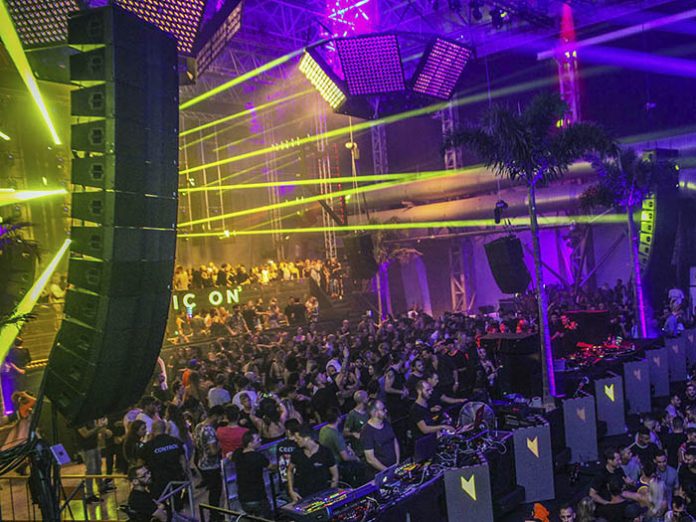 When the largest nightclub puts on a special season-end event, its magnitude is difficult to ignore. Open since 1993 on the Spanish island of Ibiza, this mammoth club can host up to 10,000 guests at one time, each invited to be themselves and express themselves as they want. Possessing a staff two-hundred strong, a ceiling height of 25 metres, a dance floor for days, an impressive live stage, large windows and a glass dome for an observatory view of the stars at night, three floors, several terraces, plus a huge swimming pool with a DJ booth above it, this unforgettable club leaves nothing to chance. Which is why on this glorious season finale evening, Privilege Ibiza made the smart decision to employ the Clair Brothers C12 loudspeaker system, along with an assortment of more Clair Brothers gear, to cover the entire venue.

The fact that this is the largest club in the world allows management to redesign the venue for individual parties and artistic shows. For this event, they didn’t hold back, calling on Clair Brothers’ Spanish distribution and rental partner, VTècnics, to recommend and design a sound system worthy of this special occasion. Josep Maria Serra, Production Manager at VTècnics provides some back story: “The Clair Brothers team understands the concept and value of global sharing between its partners. On this occasion four companies in southern Europe shared their equipment and knowledge which allowed us to achieve the best sound possible. My company, VTècnics, worked with other Clair Brothers partners Grupo Friends, also from Spain, Audio Concept from France, and Prase Media Technologies from Italy. It’s a total team effort of collaboration and pitching in together!”

A downside of being such a massive venue with the ornate design features, such as glass and metallic surfaces all around, the acoustics present a real challenge to finding a strong, yet balanced sound throughout. Josep points out, “The venue does not have good acoustics because it has so many reflective surface elements. And the floor has a giant swimming pool with a cover on it, which unfortunately works as a big resonance box. What we needed to do was create a sound system that was strong on clarity, with powerful subs, that would be easy to control. The Clair Brothers C12s and iS218s more than delivered.” An additional challenge for setting up the sound system was the presence of a monstrous lighting system. “We had fixed anchor points to hang the C12s,” explained Josep. “It was impossible to scroll the anchors in any direction because within the structure was a twenty-ton pro-lighting rig. It was essential that we respect those loading points.”

The final, exclusively Clair Brothers, sound system designed for the big event consisted of twenty-four C12s, twenty-four iS218s and eight FF2s for the main stage; eight i212s and two iS218s in an additional hall; 12 i212s and four iS218s in VIP Zones 1 & 2; four kiTCurve12s, two kiTSubs and four C12s in VIP Zone 3; two C12s and four iS218s for the DJ set monitor; and all amplifiers were CB-PLM12K44s and CB-PLM20K44s. The VTècnics production team that expertly pulled off the evening were sound designer, Francesc Güell; system engineer, Narcis Solé; sound assistant, Juan Carlos Álvarez; and monitor engineer, Konstantinos Ftoulis. “It was a super fun night for all of us and the sound was great,” concludes Serra. “One promoter in attendance went so far as to say that this is the best sound he’s heard on the island of Ibiza in thirty years. Thanks, Clair Brothers!”