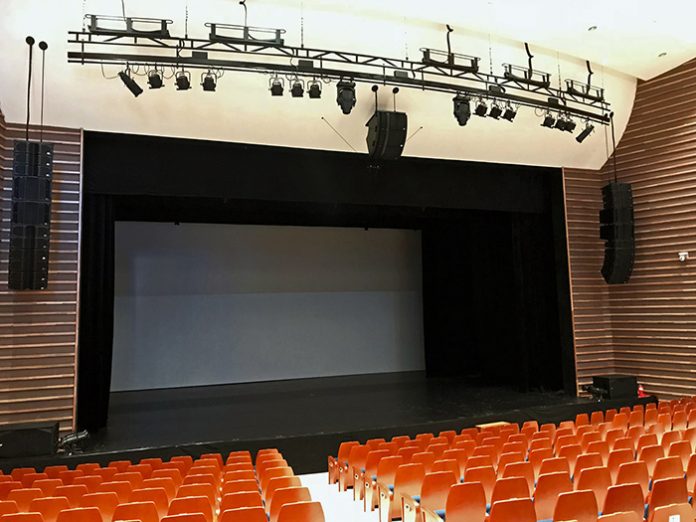 Interestingly, the sound system is designed in a very specific manner that would be unexpected in most other markets, with the subs deployed in the middle of the main P.A. line array. J.J. Song, VP of sales, Clair Brothers Korea, explains that, “While this configuration is used on a case by case basis, it exists because of the size of our buildings and the available amount of land they sit on, especially in the centre of the city, where to handle the necessary amount of people the rooms are designed to be taller and shallower than typical theatres. In these cases, the subs in the middle of the line array usually face toward the edge of the balcony and divide the top section of the array from the bottom. The key with this set-up is to have the ability to control and process the system as two line arrays in one cluster.”

The main P.A. is made up of nine Clair Brothers C8 line arrays per side; four flown CS118 subs; two stacked CS218 subs; three CAT115s as centre fill; two kiT15s for stage fill; four 1AM stage monitors; and four 8CXs under the balcony – all powered by Clair Brothers/Lab.gruppen amplifiers. For this 600-seat room, considerations were made with regard to the quantity of speakers in each array as part of a determined speaker cluster’s location and height, and the system’s ability to fit within a set budget. An Allen & Heath dLive S5000 mixing console was also installed.

Seong Keun Ahn, chief engineer, Clair Brothers Korea explained: “In 2018, we did a C8 line array demo for a selected group of audio engineers in Korea. They were impressed and praised the quality of the sound and the high SPL out of a such a compact box. Especially noteworthy in the C8 speaker design is the ‘integrated passive crossover network’ that can reduce the amp channel count required while functioning as a bi-amped three-way speaker. We must give a great deal of credit to Josh Sadd, Clair Brothers chief design engineer, for designing technology that saves client budgets without compromising sound quality. Here in Sokcho, we held a competitive system demo right in the art center – Clair Brothers versus two other top brands. The demo took place in front of Sokcho Art Center officials. Of course, they chose Clair Brothers!”

Hyo-Seong Song, technical director and chief sound engineer at Sokcho, elaborated: “Our Clair Brothers system is like an extremely well-built car. It drives as you drive without compromising quality.” This is saying a lot given the dynamic range of performances taking place in the auditorium, everything from city conferences and dramas for kids, to classical music, Korean traditional music, K-Pop performances, and even heavy metal bands. “We are enjoying every bit of it!”