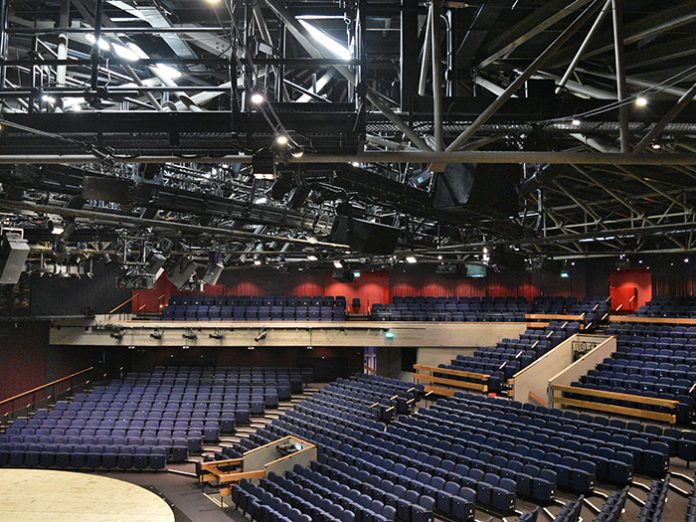 After many months of forced closure due to COVID restrictions, the Chichester Festival Theatre (CFT) has burst back onto the scene with Daniel Evans’ glorious revival of the Rodgers and Hammerstein classic, South Pacific. “Chichester is back with a bang!” said one critic, echoing the sentiments of most, whilst the Guardian dubbed it “A roof-raising triumph.” CFT is indeed back, and with a state-of-the-art EM Acoustics sound system to boot.

CFT is one of the UK’s leading producing theatres, regularly selling out the 1,300-seat auditorium and transferring plays and musicals into London’s West End. The Grade II listed venue recently underwent an extensive renovation project followed by by a comprehensive audio upgrade to an EM Acoustics sound system in 2019. This has since been upgraded again to feature EM Acoustics’ flagship awrd-winning R10 loudspeaker and the medium format HALO-B line array system.

“It was all a bit piecemeal following the renovation, but having replaced our existing outer delay line with EM Acoustics EMS-61s and added EMS-51 front fills, we wanted to update the rest of the house to EM to create a more cohesive system,” explained CFT Head of Sound, Mike Keniger. “This is always a challenge in a venue with a thrust stage but in 2019 we were able to replace the larger existing boxes for EMS-129s which made a huge difference in both coverage and quality, and was of great benefit to the mix of productions – from plays to musicals – that the theatre produces.”

Subsequently, Mike became aware that EM were working on a radical new point source box, having seen it featured in industry press. He was able to attend a demo in 2020 and was immediately hooked. “I was extremely impressed by the sound of the R10 from the moment I heard it,” he recalled. “Both speech and full range music reproduction were handled exceptionally well. Later in the year when we were looking at the HALO-B system, we had the opportunity to trade up to R10 as well, so we jumped at the chance. We’ve now replaced our trusty EMS-129s with R10s, and although I was sad to see the EMS-129s leave the building, I am more than happy with R10 as the replacement!”

As for the HALO-B system, it replaces the HALO-C system, which the theatre had on trial for two musical productions in 2019. “We really liked HALO-C and had lots of compliments on the transparent sound it produced, but we wanted the additional horizontal coverage and power handling of HALO-B. The full system was finally installed earlier this year in time for our grand reopening with South Pacific.”

The CFT system comprises a main L-R system for music and FX of eight HALO-B cabinets per side, two S-215 subwoofers, two S-218 subwoofers and a pair of EMS-81 proscenium sidefills. The flown vocal system is distributed around the auditorium in three distinct delay lines: loudspeaker ring one over the stage comprises six R10s; further back loudspeaker ring two – the first delay line – comprises a further five R10s; and further back again speaker ring three – the second delay line – is comprised of 14 EMS-61s. Eight EMS-51s provide under-balcony delay and a further 14 EMS-51s are on front-fill duty.

“The R10 is such a capable loudspeaker that it has further improved level of detail in the system and also integrates exceptionally well with the HALO-B,” continued Mike. “We often blend the R10 vocal system with the output from the ‘prosc’ L/R HALO-B system, so this pairing works really well for us. Coupled with the DQ amps delivering plenty of clean power and headroom and integrated with our desk and system processors via Dante, we have a world-class system that has more than proved its worth. South Pacific was the first major test, and it passed with flying colours. The reviews have been tremendous, and a significant part of that success is thanks to the superlative sound – great production is one thing, but if the audience can’t hear it, or it sounds bad, it ruins the whole show. When we get the kind of rave reviews that we did for South Pacific, I know that although we’re the ‘invisible element’ we’re responsible for part of that success.”

Mike has a final word for EM Acoustics themselves: “Throughout the process of us experimenting with various combinations of speaker boxes and hardware, EM have been extremely supportive and generous with their time and knowledge, even during the challenging times the industry has faced over the last 18 months.  It’s really helped us focus on deployment of the sound equipment in our building; consequently we’re now in a really good place with a system that is more than capable of matching and exceeding the expectations of designers and the creative teams that work in the theatre. I’m proud of what we’ve achieved together and can say with confidence that we have a system to rival the best theatre systems anywhere.”