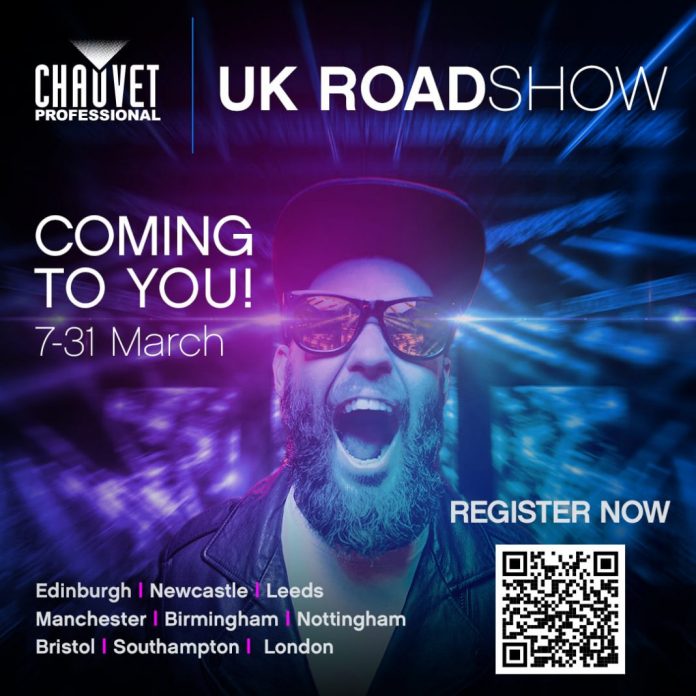 On Saturday March 5, The Scottish Opera concludes its run of A Midsummer’s Night Dream at Edinburgh’s Festival Studio. Two days later, an event less dramatic, but equally magical (at least as far as lighting designers and programmers are concerned), will take place in the theatre when CHAUVET Professional kicks off its UK RoadShow 2022.

Starting in Edinburgh on 7 March on to London on 31 March, the roving event will crisscross the UK, making nine stops and covering 694 miles to showcase many of the latest, innovative products from CHAUVET Professional and ChamSys.

With the exception of one stop at ChamSys headquarters in Southampton, all of the sessions will take place at live entertainment or broadcast studio venues. “We elected to stick to the kinds of places that our customers actually work in day to day,” said CHAUVET Professional UK Sales Manager, Sam Bowden. “Here we can get a full appreciation of things like the colour mixing, brightness, smooth movement, zooming capabilities and other outstanding merits of our fixtures.”

Among the products that will be highlighted during the UK RoadShow 2022 will be the compact, tour-grade series of Maverick Force moving fixtures, the intense Color STRIKE M motorised strobe/wash/blinder, the COLORado PXL Bar IP65 tilting batten, and the onAir range of soft light panels.

Joining these fixtures will be some CHAUVET Professional products that have been making waves in the theatrical and broadcast worlds of late including the award-winning Maverick Silens, and the Ovation Rêve multi colour ellipsoidal. The sessions will also feature the ChamSys Stadium series of consoles including the new MagicQ 250M.

In addition to seeing presentations of these products, guests at the sessions will have ample hands-on opportunities to get to know the fixtures and consoles up close. There will also be lunch served during the six-and-a-half-hour sessions, and prizes will be awarded, as will gift swag.

The sessions run from 10:00 to 16:30 and take place at a range of venues and locations: www.chauvetprofessional.com/roadshow/uk-roadshow-22