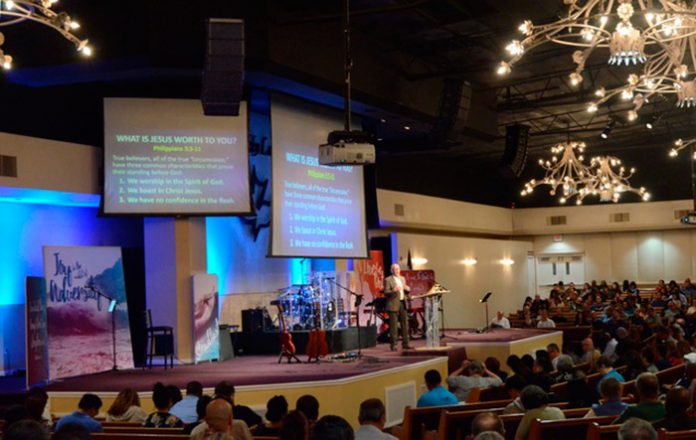 Jon Bart, QVA’s Owner and Senior Design Engineer, reports that the company has enjoyed a nearly decade-long relationship with Senior Pastor Jeff Gill at CCSB. “Our first few meetings with Pastor Jeff and Worship Leader Kevin Click gave us insight into the scope of the music department’s role in services and also the complexity of the coverage of the 1,700-seat venue,” he said.

“Due to the demands on the speaker system to provide concert level sound we decided the best route to take was the QSC WL3082 passive WideLine 8 arrays with matching 18-inch passive subs and dedicated amplification,” said Bart. A total of 18 WideLine 8 modules were used, configured as left, centre and right arrays. Two GP118-sw single-18-inch and two GP218-sw double-18-inch subwoofers were installed below the 50-ft. by 30-ft. stage.

“A common problem with sound systems is the underpowered sound of amplifiers being taxed at higher SPLs,” comments Bart. “We believe in an airplane hangar’s worth of headroom when it comes to amplification, to the point that no amplifier channel is being taxed at maximum dynamic range. The intelligent choice was the QSC PLD4.5 amplifier with DSP.” A total of six of these four-channel amplifiers were used to fully power the new speaker system.

Bart reported: “QSC’s engineers provided fast and accurate modelling of the room for speaker placement, and once adequate electrical power was installed in the amp rack room, the install and set-up of these amplifiers were finished within two days. QVA’s install engineers Shannon Miner and Dave Henk, with exceptionally helpful input from Audio Geer’s Mike Cromer and Ben Fredrick, made the on-board DSP set-up intuitive and fast. Line array installation by QVA’s Fred Scala was completed within three days, including striking the old speaker system and routing new cabling.”

The best part is that the entire system, which is controlled by a Midas Verona 48-channel analog mixing console, was ready four days into the project, continued Bart. “Our initial tests of the new system with South Bay’s sound engineer, Pastor Jeff Gill, Kevin Click and a few choice musicians were met with ear-to-ear smiles. Once the final DSP settings and RTA of the room were complete, our walk-around experience was rewarded with excellent, even coverage in the room, from front seating to extreme left, right and back rows—second only to the compliments on the accurate sonic reproduction.”

Bart concluded: “QSC’s live sound system and QVA’s meticulous installation have received excellent reviews by system operators, pastors, performing artists and congregation members. With all 1,700 seats normally filled, that’s a good number of people to please. Anyone who is passionate about sound lives for this win-win experience.”