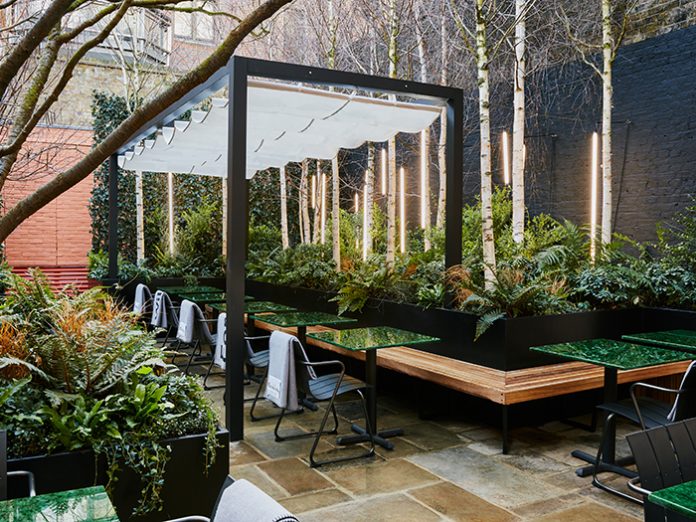 Browns offers an unrivalled, tactile in-person experience that flies in the face of the current trend for instant online click-and-ship gratification. Blending exceptional service with creativity and technology, the Browns ethos is personified in the recently opened Dimorestudio-designed flagship boutique at 39 Brook Street in the heart of London’s Mayfair.

Following extensive construction work which saw the Grade II* listed building renovated, a contract was awarded to South Hampstead-based AT&C Professional System Ltd to design and install a fully networked, high specification audio system throughout every room. The brief was unambiguously clear: “We want the best sound quality possible – and we don’t want to see it.”

“Given that we couldn’t install speakers onto any of the walls or ceilings due to the building’s listed status, which also restricted the size and shape, that considerably narrowed the field when it came to selecting a suitable loudspeaker supplier,” explained AT&C Business Development Manager, Alan Smith.

Among the options discussed were a fully wireless hi-fi style approach – not ideal from both reliability of service and fidelity considerations – or plaster in-wall speakers, which could have met the aesthetic brief but were unlikely to sound particularly exciting. To accommodate the severe limitations on speaker placement a more sophisticated technological solution was chosen designed to provide tightly controlled dispersion from minimally sized enclosures.

That led to only one possible contender: design-led Italian manufacturer, K-array. “We got in touch with K-array’s UK distributor 2B Heard and, aided by Director, Dave Wooster’s acoustic modelling, drew up a specification based around large numbers of Lyzard low profile line arrays,” said Alan.

Working from the initial drawings supplied by the AT&C team it became very clear that the acoustic design was going to need a solution, according to Dave, that was “way out of the box.”

The designers were adamant that minimal visual impact on any of the spaces would be required – and that brief very soon crystallised into “no impact!”

Based on positional drawings and initial acoustic predictions, Dave specified a selection of K-array speakers that would fit the impossibly small physical spaces from the Lyzard, Truffle and Rumble sub-compact ranges.

“While we able to demonstrate quite easily that the coverage and SPL would be exactly as required, the designers insisted that we integrate most of the speakers into their railing structures, either forward facing or upward facing for reflection. Subwoofers were hidden into floor vents as again no visible speakers were permitted,” explained Dave.

The audio experience at Browns’ flagship London boutique is total. Every one of the 26 individually Extron controlled zones, including the changing rooms, enjoys the same high level of sound quality from Browns’ own specially curated playlists, produced by the 22 Lyzard-KZ1 mini point source and 72 Lyzard-KZ14 ultra-miniature line array loudspeakers. These are supplemented by 17 Truffle-KTR24 compact subwoofers and 44 Rumble-KU44 compact subwoofers.

Distributing faultless audio to so many loudspeakers and to a labyrinth of discrete spaces simultaneously required a creative power amplification infrastructure, which was only made possible by multi-channel intelligent amplifiers from Innosonix, another of 2B Heard’s UK distributed brands. Offering the world’s highest channel density, two MA32/D 32 channel models with built-in Dante networking power the entire speaker system.

“We could have used 10U of rack space,” said Alan. “But instead we needed only 4U of rack space to deliver 64 discrete channels, with each and every channel individually controlled by on-board DSP. This gave us an elegantly simple solution.”

By far the biggest challenge was striking the right balance between sound coverage and the designers’ aesthetic expectations. K-array’s physically minimalist profiles and the readily available choice of standard cabinet finishes made this an easy task, with the polished silver treatment allowing the speakers to disappear into the starkly modern décor, and in many cases be completely invisible. A few are finished in black, while in one area, white finished line arrays are fully integrated into the surrounding white ceiling light fixtures.

Because of the building’s Grade II* status, all the showrooms are essentially designed as self-contained shells as nothing is allowed to touch the original structure. Some speakers are recessed into the metal framework, while in the larger areas the KZ14 mini line arrays are mounted on custom brackets with a pre-determined angle and with only one fixing into the re-plastered ceiling.

“The KZ1s are so small, measuring only 3.7cm by 2.2cm, that we could easily fit them into shadow gaps around the building, particularly in the changing rooms where you really can’t see them,” said Alan.

“Some of the subwoofers are either installed behind grilles, or are built into what look like heating plates installed into the ground. These are set back a little so they can’t be seen and radiate low frequencies very effectively into the room.”

In the main event space, known as the Yellow Room, a pair of Thunder-KMT18P 18” subwoofers lay down the low-end foundation for a formidable Kayman-KY102 portable line array system with sufficient grunt to prompt a well-known visiting DJ to enquire where he could get a system to tour with. From someone who lives and breathes music that is indeed a strong testimonial.

“The system sounds great. From our perspective as audio purists there have been trade-offs – in certain areas larger, more visible speakers could have given us slightly better coverage, but we stuck to the brief and the client is delighted with the end result. When you walk around the store and hear sweet music all the way through, it’s so satisfying considering that the surfaces are hard and audio-unfriendly. The small KZ14 line arrays gave us the ability to produce good coverage in very wide spaces, and that’s what made this project work – you just can’t use another brand.

“The client is really happy,” concluded Alan. “Nobody expected that we’d be able to produce audio of this quality without the hardware being visible, and they didn’t think the tiny K-array speakers could do the job.”

A spokesperson from Browns confirmed that the K-array and Innosonix system more than fits the bill: “In terms of aesthetics and answering the brief for our new flagship Browns Brook Street, AT&C successfully delivered. We are also incredibly impressed with the audio quality and ease of use, as well as the delivery of a flexible events sound system that allows for on and off-site DJ set up.”