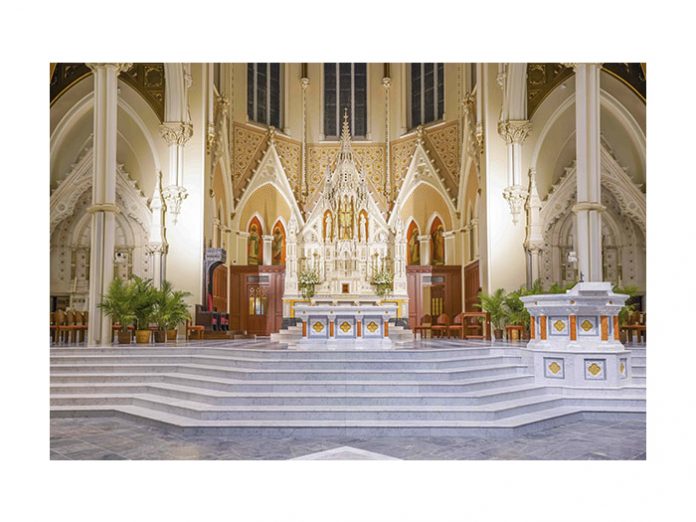 As the largest church of any faith in New England, Cathedral of the Holy Cross has long served as an important gathering place and “Mother Church” for Catholics living in the Archdiocese of Boston. Since its dedication in 1875 however, the structure’s Upper Church has received relatively little refurbishment — until 2018, when crews began an extensive renovation project of the 150-year-old Gothic revival structure. This renovation importantly included a full-scale overhaul of the Cathedral’s sound system, which is now powered by Powersoft Ottocanali 1204 amplifiers and a custom designed line-array employing Powersoft D-Cell 504 2-/4-channel amp modules with onboard DSP and controlled by Powersoft’s Armonía software. The results of the renovation were debuted to over 30 million viewers worldwide via CatholicTV’s filmed broadcast of the Chrism Mass held at Cathedral of the Holy Cross on 19 April.

Evan Landry, CTO and President of Landry Audio Division, Commlink Integration Corporation, designed the new sound system for Cathedral of the Holy Cross around a custom unit based on a column of two Innovox MicroBeam 32 units, which serves as a focal point for the entire sound system. “The primary focus of the system acts as an acoustic anchor, so that all the sound sounds like it’s coming from the chancel — the place where it looks like it’s coming from,” Evan said. “The purpose of this setup is to increase listener engagement, clarity and intelligibility.” Due to dimensional limitations in the Cathedral, the custom MicroBeam system uses 52 elements — rather than the 64 that are normally used — and makes use of Powersoft’s D-Cell 504 module, which provides processing and power for the dipole spaced low-frequency section and processed line level outputs used with the Cathedral’s custom MicroBeam.

The Innovox MicroBeam steerable line array uses 26 active mid-/low-frequency elements (2.75-inch cone drivers), which are powered by Powersoft D-Cell 504 modules, and 26 high-frequency elements (3.25-inch ribbon drivers). “Virtually everything Innovox does as a company uses either ribbon or AMT [Air Motion Transformer]-type high-frequency elements,” said Chris Oswood, owner of Innovox Audio. “We do this for the principle reason of improved transient response over conventional means, and that has everything to do with delivering the speech chain to the listener without the degradation that results in loss of articulation. We do that to keep the transient information present, and to optimize for speech clarity — but it has a kind of corollary benefit, which is clarity and detail in musical reproduction.

“We use the D-Cell modules in our MicroBeam designs primarily because of the sound quality of the processor and amplifier sections,” Chris continued. “Additional benefits that we find useful are the form factor, small physical size and power density of the modules. Many of our products are columnar in shape, and these modules are easily integrated as a result.”

To carry the sound coverage from the chancel through the 200 feet extending back to the rear of the nave, Evan and Chris installed 18 additional Innovox line arrays — one for each of the support columns running along the aisle. For powering each of the support line arrays along the columns, an additional five channels of monitors, plus another speaker acting as a mirror image of the acoustic anchor, they chose Powersoft Ottocanali 1204 amplifiers.

“We knew that we needed one discreet channel per speaker in the column, because we needed to have them appropriately delayed from the perspective of the MicroBeam,” Evan said. “There are 18 columns that essentially have to have unique delay times, so we knew our channel count was going to be high, and we knew the amount of power we were going to need was going to be relatively low, since the column speakers were just used for articulation extension. The Ottocanali 1204 had the combination of high channel count and low power channels, while maintaining the sound quality that we needed to make this a world-class installation.”

Chris said that it’s not just sound quality that keeps him using Powersoft amplifiers on other house of worship projects in which Landry installs his Innovox speakers. “We certainly encourage the use of Powersoft,” Chris said. “The difference in sound quality between Powersoft and other manufacturers is significant, and — in my opinion — really under-appreciated in the industry.

“Build quality is also very high with the product, as well as the package density. Often various parties in projects really battle for rack unit real estate, and high power density is really helpful on these projects. The efficiency of the product is not lost on us either, in terms of power consumption over time, cost to operate, and environmental considerations. That’s another area, of course, where Powersoft is leading — but the real driver for us is sound quality.”

And, to set up the system’s DSP, Oswood used Powersoft Armonía software, which he’s gotten to know well by now. “We use Armonía routinely in other products by Powersoft,” he said. “It’s a very easy-to-use platform, and it has a lot of flexibility. We’re kind of lumping together a number of things when we talk about sound quality, but that refers to the quality of the amplifier sections, as well as the sound quality of the DSP. And the quality of the Ottocanali DSP is very high.”