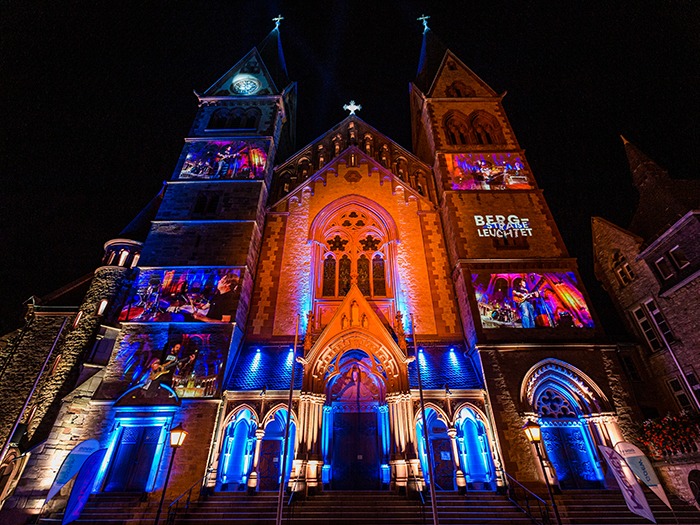 With events halted, normally busy rental company MKM had an abundance of lighting products including an extensive Astera inventory of AX3 LightDrops, AX5 TriplePARs and AX7 SpotLites sitting in the warehouse, so these were used to support all 12 of the lighting installations which were carefully crafted and delivered over a two-month period.

Astera AX7s were used at all locations … culminating with a truly spectacular and innovative event at St. Peter’s church in Heppenheim. “Everyone in the area knows and loves the highlighted buildings and spaces,” stated Johannes, “and with tasteful and well-planned lighting and the application of colour … they were transformed and could be seen literally in a ‘different light’ each time, so people could enjoy and take away new perspectives from their immediate environment.”

He added that in a time when events have not been possible, this was a safe and imaginative idea to provide something interesting in which people could engage.

Astera products were, of course, ideal for the task of lighting these works, with their brightness, long and regulatable battery power and App control, dispensing with the need for running cables and greatly assisting the deployment process in each case. “The Astera lamps are very efficient in saving setup time, and with the AX7s and AX5s being IP65 rated, we were also confident in using them irrespective of the weather!” Also, with less cabling needed, the team could take a smaller vehicle full of kit to the location.

Up to 200 fixtures – Astera’s, plus others – were used in most cases to give good and detailed coverage of the buildings and landmarks.

“It was so much fun to use the Asteras – they made the set ups extremely quick and efficient,” enthused Johannes. A grandMA system was used for lighting control, plus the Astera App for quickly setting up the DMX addresses of all relevant Astera fixtures.

Johannes was initially inspired to start Bergstrasse Lights by the original ‘light it in red’ project kicked off by the #NightofLightDE lighting action in June which saw thousands of buildings illuminated red across the country to draw attention to the challenges and realities facing the event industry during COVID-19.

The Rady Shell at Jacobs Park