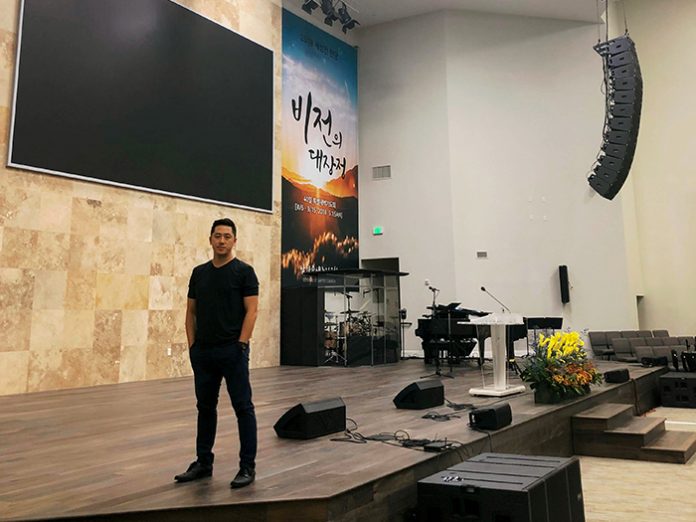 With over 1,500 members attending the Berendo Street Baptist Church every Sunday, providing adequate audio to the brand new, state-of-the-art sanctuary is important. In the heart of Koreatown in Los Angeles, California, the Church chose dBTechnologies to power its new sanctuary, installing 12 VIO L210 boxes per side, as well as VIO S318 for subwoofers, four DVX DM12 boxes as monitor wedges and several IG1T, IG2T and IG4T units throughout the main level of the congregation as side fills, front fills and delays. LVX 12’s were also installed in the lobby to cover the reception area.

Troy Choi of Solid Sound Solutions worked on the project, noting the reasons that dBTechnologies was the brand of choice for this sizeable installation: “I was looking for a good sounding box with a target budget in mind last year, and I had the chance to use DVA T8 and DVA T12 last year for the small church show and also worked on an install with DVA T8 and DVA T12 a different church. Frankly, it was pretty impressive, way more power than I expected. From that experience, I was able to confidently choose the VIO series for the BSBC church, as it’s the flagship line array system from dBTechnologies and DVA had been so reliable.”

The massive 2,000+ seat sanctuary hosts three services every week. Each service has a small orchestra, two small choirs and one choir with nearly 100 vocalists. Because of the unique cylindrical wave front created by the waveguide of the VIO L210, the system has precise high-frequency directivity control, which greatly benefits the throw distance, especially in a sanctuary like that of the Berendo Street Baptist Church, with a long room and high balcony. The advanced sound processing from FIR filters gives the VIO L210 line arrays incredible coverage coherence, so every member of the audience will be able to enjoy the worship service whether a soloist or a hundred-member choir is performing.

As with all church sound installations, while the clarity of the music is important, the paramount focus must be on the intelligibility of the sermon. Thanks to both the sound processing and the unique internal design of the VIO L210 Series, as well as the strategically installed IG1T units around the congregation, the pastor’s message is able to reach every ear in the sanctuary.

Troy said: “so far, the system has been working very well. The network function is good, everything sounds good, and the rigging is good. Most of all, the service has been the best in the world. The sales manager Colin Studybaker and the reps from MacWest Group are the best of the best. They’re highly qualified engineers, kind and very helpful.”

When asked what his favorite thing about working with dBTechnologies so far has been, Troy explained, “I am a touring engineer and front of house engineer for a lot of shows. I’ve used many different PA systems, and I can say that the sound quality of dB never falls behind at all. I especially really like VIO Series. It is a very well designed line array, and the price is very reasonable. If there is someone who is looking for really great sound and super high-quality tech support on a budget, I would tell them to choose dBTechnologies.