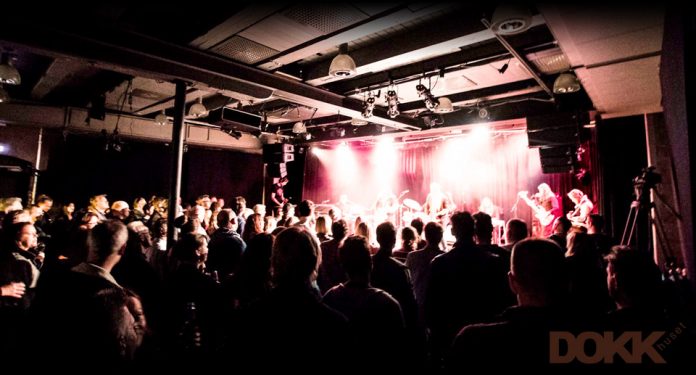 Situated in one of the few original buildings in the city’s now gentrified former shipyards, Trondheim Norway’s Dokkhuset Scene cultural center serves as both a showcase for the city’s live music scene and as a reminder for the city’s shipbuilding past. Completed in 2007, the center was the final piece of a mixed-use revitalisation project and today serves as a regional hub for jazz and contemporary music, complete with a state-of-the-art avon system based around VUE loudspeakers.

In late 2016, Dokkhuset Scene management turned to Edgar Lien and Tor Breivik with Trondheim-based avon to specify a replacement for the original house system. Venue management was clear in their objectives, streamline setup for visiting FOH engineers and improve intelligibility and clarity across their broad range of performance types, from spoken word to high-power rock shows. According to Breivik, the team faced challenges inherent in the venue’s origins as a pump house, not a performance venue. “The venue has extremely low 3.5 meters (11.5 ft) ceiling clearance in a almost flat-floor room 15 metre (50 ft) long. I knew immediately that we could achieve consistent coverage in that challenging space while also meeting the client’s desire for sonic clarity and ease-of-setup with a hybrid CST line array system from VUE.”

Originally, eight out of the nine engineers chose the VUE option. Breivik informs that, “the 9th” engineer, Hugo Alvarstein, chose the older system for surprising reasons. “He really wanted to use the VUE system but he did not dare because his band was so loud, mistakenly thinking that the VUE elements seemed too small to handle the performance. After hearing the VUE system through the other eight sets, he realised the system could more than handle the levels, so much so that he actually bought a VUE system and is now an ambassador for avon & VUE.”

Following the two-system test, Tor chose a mix of al-4 and al-8 elements to deliver the best-possible coverage with the lowest profile. The final system configuration combines two al-8s with three al-4 elements, plus a single hs-28 ACM subwoofer per side. VUEDrive System Engines provide power all power and processing for the arrays while onboard VUEDrive electronics power the subs.

VUE’s Continuous Source Topology (“CST”) technology gave avon the flexibility to assemble hybrid virtually seamless arrays of al-4 and al-8 elements to provide the necessary vertical coverage with minimal obstruction of sight lines. The hybrid array also more than provided the necessary SPL along with VUE’s renowned pristine acoustic signature. “Following the test, we realised we needed the throw from the upper al-8s to reach the back of the room and with the smooth transitions that is possible, the max splay angle of the al-4s for the front. The al-8s also added distinct added richness in front of the stage compared to an all al-4 hang.”

Since commissioning, the VUE system has received rave reviews from visiting and in-house engineers alike. In fact, several have noted that the system has transformed the experience of running sound in the once-challenging venue as “The level of clarity and control is unmatched — this sounds like a totally different room,” said Arild Schei, Dokkhuset Scene in-house music producer.