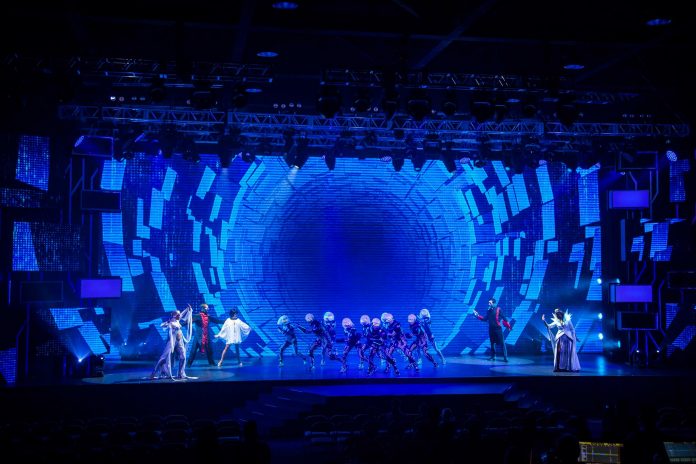 For Ocean Park, staying at the top of Hong Kong’s hotly-contested amusement park market means luring audiences with ever more thrilling attractions. Running up to five times per day from mid-December 2016 to mid-February 2017 in the park’s Applause Pavilion, this holiday season’s major event was the Cyber Illusion Spectacular.

Built around the visual excitement of magicians, illusionists, aerialists, quick-change artists, acrobats, dancers and a master fan manipulator, this 30-minute, energy-charged, attack on the senses was performed on a constantly-changing stage, featuring striking visuals from LED panels, moving lights, pyrotechnics and atmospheric effects.

it was Hong Kong-based Cosmo Pro AV who supplied, installed, configured and programmed the complete video system, including LED wall panels and the AV Stumpfl technology to drive them.

Given the short and intense production period and the tight integration of the video content with the performance, in particular where some acts were interacting directly with the images, it was critical that the video content could be swiftly adjusted during rehearsals.

Jason Yeung chose two of AV Stumpfl Wings Engine media servers to deliver the video streams to the LED wall and panels; a quad-output Wings Engine Stage and a Wings Engine Raw media server. The Raw server can deliver up to four simultaneous streams of uncompressed 4K video content at 60fps. Uncompressed TGA,TIFF or PNG sequences can be used directly without the need to convert them into intermediate codec formats before playout.

By supplying a full suite of AV Stumpfl’s Wings Media control and playback solutions, Cosmo Pro AV have delivered a system which was simple to integrate, operate and maintain for the run of the show, and easy to reconfigure for a wide range of future high-end projects.