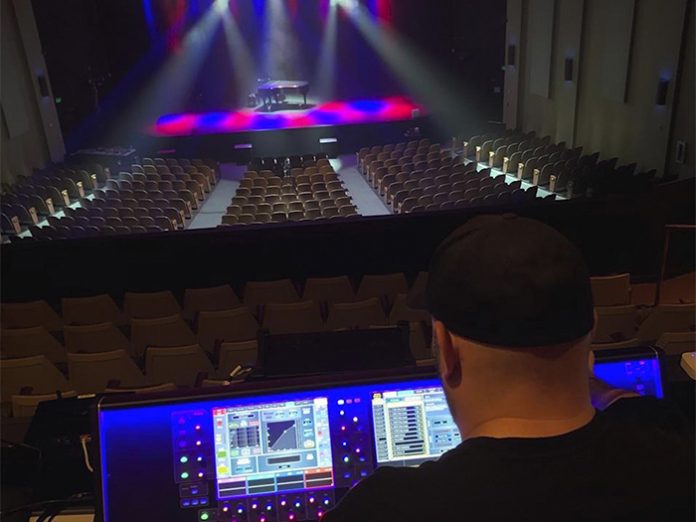 Century Village in Deerfield Beach, Florida is a community that revolves around activities taking place within a central clubhouse housing a 1600-seat theatre. The site of everything from Broadway-style shows to concerts by national touring acts and current movies, the theatre recently upgraded its audio with the addition of a dLive S7000 Surface and DM64 MixRack from Allen & Heath.

The new dLive S7000 system was provided by ShowPro of South Florida. “This theatre, along with a number of other smaller venues in The Sunshine State, are some of the biggest entertainment buyers in the Southeastern US,” said Showpro’s Nicolas Stoner. “That fact alone provides more than a clue of the number of live shows that pass through this room, which total over 100 per year.”

Nicolas, along with the theatre’s technical director Mike Prudente, first became aware of what dLive could do upon attending one of the Allen & Heath Academy masterclasses hosted by Michael Bangs. “I was sold right there,” Mike confided. “Its user-friendliness struck me immediately. It was amazing how simple it was to make things happen—everything was in front of me all at once.”

After Mike had his dLive S7000 and DM64 up-and-running, he began to integrate the system with QLab multimedia playback cue-based software. One of QLab’s first functions was to serve as a source for triggering previews and voiceovers seen and heard prior to movie presentations, as well as control of the house lights.

“Whether we’re showing a movie or doing live theatre,” Mike explained, “we rely upon a number of time-coded QLab events. If each isn’t perfectly timed, nothing else follows properly. Linking the dLive S7000 control surface with QLab is really quite simple using Allen & Heath’s TCP/IP protocol, Dante, and a single network cable. With communication capable of going both ways between the two systems, I can trigger effects and other events right from the console while still staying right in my mix and never even having to look at the QLab screen.”

Beyond this dLive/QLab synergy, Mike also reports that the chameleon-like malleability of the S7000 serves him well. “I can layer any input or output anywhere,” he added. “That’s especially useful for last-minute additions requested at live music shows right after I get everything laid out perfectly on my board. There’s no fuss, I just drag-and-drop the additions to wherever I want on the surface. It’s about as hard as using my mobile phone.”