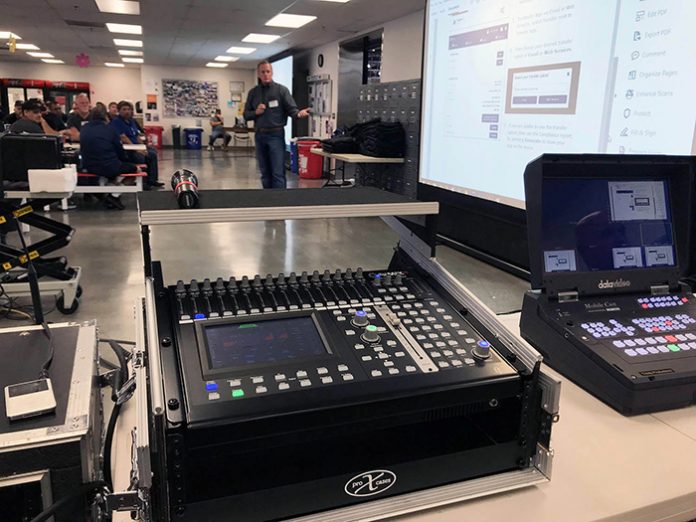 John Moore launched Trinity Productions in the early 1990s in response to his frustration with the lack of truly professional sound production companies in Northern California at the time.

He was trying to put on a “concert in the park” series and getting little help from the companies whose sole reason for existing was to offer help to event organisers and audio engineers like himself. Flash forward 25 years, and, in addition to expanding operations into A/V integration, Trinity Productions continues to raise the bar for the audio production industry.

After extensive research, Moore recently added two Ashly digiMIX18 digital consoles to his production and rental equipment list, citing Ashly’s build quality and sound quality together with the digiMIX’s unique combination of powerful features, intuitive operation, and ability to freeze all settings except volume adjustments so that clients can’t get into trouble poking around in the mixer features they don’t understand.

“We wanted a mixer that would have a powerful feature set so that we could accommodate and optimise sound for any situation… but that would also minimise the number of controls for the user so as not to confuse them. In the past, we’ve had several bad experiences where we set things up for a user-operated event, leave, and then get a panicked phone call a little while later.

“Users dig around and get themselves into a layer that they can’t get out of, or they make some bad changes that they don’t know how to undo. In some cases, we have to go back out and in other cases, I have to walk them through resetting the channel or the whole console. I was attracted to the Ashly digiMIX18 because it can prevent that kind of thing from happening.”

“The ‘fader highlight’ button lets us set things up and then freeze everything except channel volumes and master volume. That prevents the client from getting into trouble. In addition, we especially like the aux send topology and the DCA features. That makes it especially easy to run small corporate events or even small bands – we can set up a DCA for vocals, a DCA for drums, and so on.

The gainsharing automatic mic mixing functionality is really usable, and I like that the master volume is always available to be turned down in an emergency.” Trinity Productions often specifies Ashly amplifiers and processors on the integration side of the business, which was also a factor in choosing the Ashly digiMIX18s.

“Ashly’s build quality is always excellent,” Moore said. “Ashly gear always works right out of the box and keeps working for years and years. In addition, Ashly’s sound quality is solid, which leads to more successful events and happy clients.”