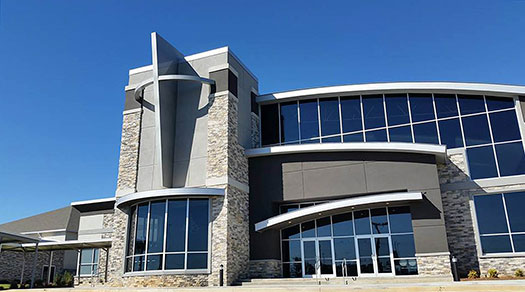 Located in the centre of Georgia, the Assembly at Warner Robins had outgrown its 600-seat sanctuary and was paying the price with multiple services scattered across the weekend. To bring the entire congregation back together under one roof, the church devised a plan to knock out the back wall and to more than double the available seating with a theater-style arrangement. In the process, integration firm MABE Production and Installation of Lakeland, Florida designed and installed state-of-the-art sound, video, and lighting systems. Citing ease of installation, reliability of performance, and flexibility for future expansion, MABE specified a complete Dante-networked sound reinforcement system, including Ashly Audio Dante-equipped ne4800 and ne8800 Protea digital matrix processors.
“The Assembly has a high-energy, contemporary worship style, and they needed a sound system with a lot of traditional, console-based control,” explained Richard Vaughan, Project Engineer and Design Engineer with MABE. “They wanted the ability to do multi-track recording, and since the church’s Technical Director had a lot of experience with Yamaha consoles, we agreed to install a Yamaha QL-series console. The console’s Dante capability inspired us to build out the entire system using Dante connectivity. It would make the installation a lot easier; it would make patching a lot easier; and it would make future expansion a lot easier. Moreover, they could simply tap off the Dante network for their multi-track setup.”
In addition to the Yamaha FOH console, a Behringer console, paired with the video recording and playback system, is outfitted with an optional Dante I/O card, and a bevy of new Shure ULX-D wireless microphones are also on Dante. An Aviom Dante distribution unit ably handles all the Dante traffic, most of which is routed through an Ashly ne4800 4×8 matrix processor and an Ashly ne8800 8×8 matrix processor. A self-powered JBL VRX line array system provides principal coverage of the sanctuary, with Ashly KLR-4000 (2,000W @ 2 Ohms) and KLR-5000 (2,500W @ 2 Ohms) two-channel amplifiers powering JBL delays and subwoofers, respectively.
“We’ve been installing Ashly for well over a decade now,” said Richard. “I’ve always been impressed with their reliability and their sound quality. Ashly’s sound is very pure and transparent. Ashly processing is straightforward, easy to use, and rock solid. Ashly’s Dante implementation is excellent – the setup and digital patching was easy, and the cabling was way simpler than it would have been with a conventional system. Just a handful of CAT6 cables took care of everything.”
The new video system at the Assembly includes 8k Panasonic projectors for side screens, an 11k Panasonic projector for the centre screen, Blackmagic switchers, a Blackmagic 40×40 SDI router, and Blackmagic converters on all the projectors and screens throughout the facility. In addition, Blackmagic recorders capture video content and camera feeds from the service. The new lighting system uses Chauvet LED fixtures for the stage, and a pathway connect snap panel for analog control of the LED house fixtures. Leprecon entry stations provide the user interface for the lighting system.
www.danleysoundlabs.com