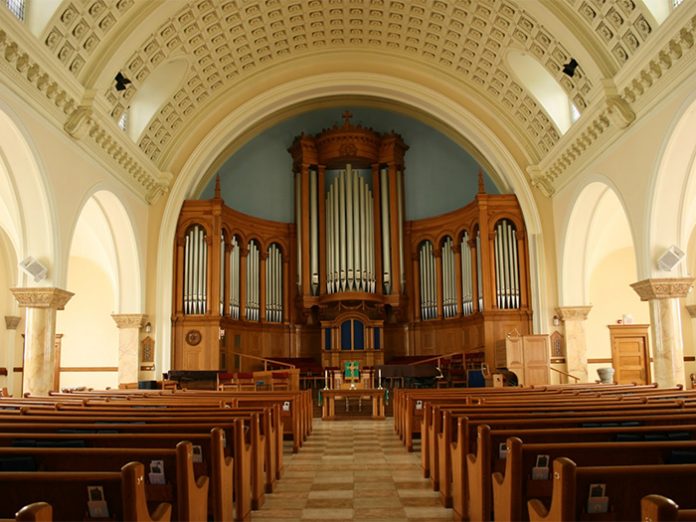 First Presbyterian Church of Ithaca had a not uncommon challenge for houses of worship: a beautiful worship space featuring a fantastic and ornate pipe organ was resulting in unintelligible audio. The solution? A top-of-the-line, pew-back speaker setup simplified by Ashly Audio offerings.

George Gleason, owner of George’s Pro Sound Company LLC, is the integrator who helped the church transform its audio performance into an experience as stunning as the church itself. But to achieve that result took some atypical audio design.

“A lot of traditional choices were eliminated immediately,” Gleason said. “The reality is they’d spent money on systems before, and they’d had some disappointing experiences. The pipe organ and the ornate space are beautiful and they didn’t want any acoustic treatment in the space that would diminish the beauty of its sound. Sight lines and the visual aesthetic were critical factors that needed to be part of any design we came up with. Basically, we were looking at how to work around a nearly six second reverb in the room without using the traditional ‘hanging clusters’ approach you’d take to that problem.”

Gleason and the church eventually decided on a design where multiple speakers are positioned on the backs of each pew. The result is controllable audio by specific zone – but that type of setup typically comes with difficult challenges in installation and configuration.

“That’s where Ashly came in,” Gleason said. “Ashly made it so absolutely clean and simple to develop something that was really quite complicated.”

With three Ashly Audio PEMA 8250.70 amplifiers, Gleason was able to connect 177 TOA H1 70v speakers and arrange them into 24 controllable zones. The fact that just three amplifiers were required was a game changer, according to Gleason.

“I thought I would have had to have another mixer and a rack of EQ and processing, wire them together, then distribute it out to multi-channel amplifiers,” Gleason said. “But all I had to do was connect the speaker home runs to the Ashly components. I reused the existing microphones and connected them into the Ashly system. We then programmed the zone-specific routing, preamplification, delays, EQ, and compression for each of the 24 zones right in the Protea software. There’s so much power in Ashly’s Protea offerings, it just worked so easily to bring all 24 zones together as a system.”

An Ashly WR2 controller is used for end user control of the system presets that allow instant reconfiguration of volumes and zoning for each unique type of service offered at the church. Mr. Gleason called it an “elegant” offering to cap off the integration.