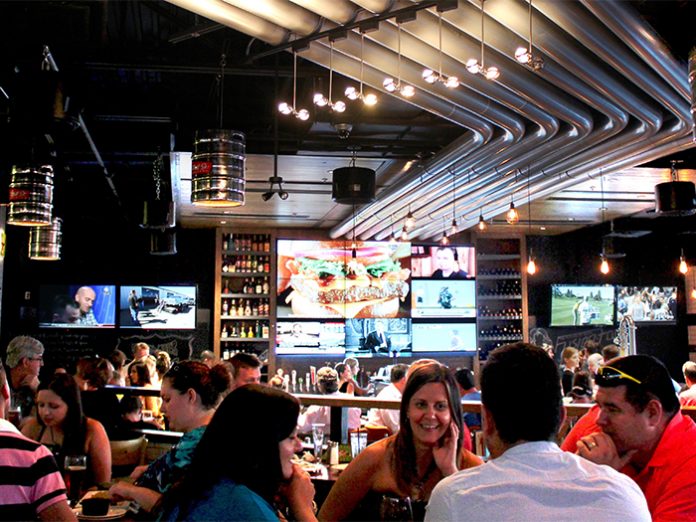 The first Beertown Public House was formed in 2012 with the goal of crafting a modern beer bar that made everyone who walked through the front door feel like they had entered a room full of friends. The concept was an idea from Jody Palubiski, CEO of the Charcoal Group of Restaurants, which operates multiple restaurant brands in Canada. Since first opening, the Beertown concept has evolved into a successful enterprise. Locations now operate in the Ontario cities of Cambridge, Burlington, London, Waterloo and Oakville.

Jody is known as a driving force in the Canadian restaurant business – not just for his large concept ideas, but for his ability to focus on the details of an operation that bring the experience to a next level. When designing his Beertown locations, Jody knew the AV experience would be critical. Thus, he called on Don Wiens, owner of the Waterloo-based Mr. Stereo integration firm, to help him achieve operational excellence on an audio and visual level.

“They are all very welcoming restaurants,” Don said of the Beertown locations. “You have multiple television panels all around the space. It is an incredibly comfortable environment to watch a game and hang out. To support that, we had to ensure we provided excellent sound as well.”

To meet that need,  Don turned to Ashly Audio.

Don utilises Ashly Audio Pema amplifiers in all six Beertown locations. The Protēa-equipped Pema media amplifier is available in either 4 or 8-channel at 250 Watts or 125 Watts per channel. Pema provides a full 8-in x 8-out matrix mixer – and any input can be assigned to any output. Pema is also a digital signal processor with the full Protea™ suite of DSP settings.

The Pema solution also includes gain sharing automatic microphone mixing, an automatic feedback suppressor, ambient noise detection and adjustment and a real-time clock with an event scheduler. It is also Class-D topology, providing energy efficiency right out of the box.

“The Pema offerings are incredibly versatile,” Don said. “Not only does it provide impressive sound, but it comes with an incredible support team at Ashly. The team has been really amazing in partnering in our success as we’ve integrated all our systems.”

Don said the goals of the system go beyond just the right amplification, however.

“Sound has to be easily controlled by the staff,” Don said. “You have to provide the right experience depending on what events may be happening. There may be a time when it is one big event. It may be a day with multiple games. Either way, we have to give the team at Beertown control.”

To do this in a streamlined manner, Don turned to Ashly’s WR programable wall remote controls. The controls offer high levels of customization at the integrator level while still bringing simplicity of use for those operating the system on a day-to-day basis.

“At the end of the day the staff doesn’t need to know what is going on behind the scenes,” Wiens said. “All they know is they are looking at a very elegant control option. If the staff moves between locations, they are using the same controls, which is a real benefit for the Beertown operation. It is just the perfect option for the organization and the staff.”

After integrating the system at the first Beertown location, Wiens was asked to continue to build the Ashly-backed solution into new locations as they opened.

“It has become a very trusted system,” Don said. “We use the Ashly components in every install because of how well they work and how much you can trust the team supporting it. Plus, having that level of control and familiarity is important to the brand.”

The combination of Ashly’s Pema amplifiers and WR controls also exist at other restaurants in Charcoal Group of Restaurants portfolio, including: Moose Winooskis, The Bauer Kitchen, The Charcoal Steak House, Wildcraft and Sociable.