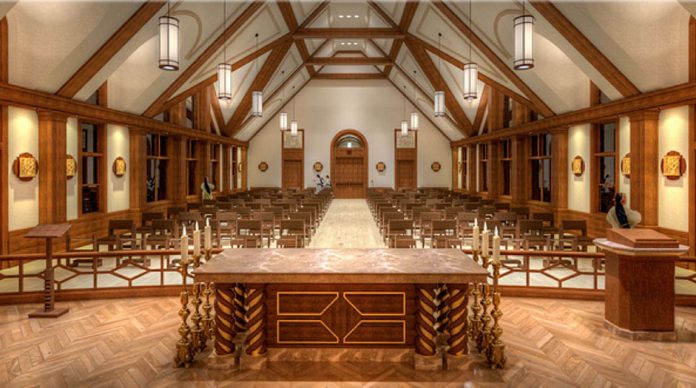 “We were involved from day one,” said Brian Cook, senior audio designer at Southeastern Sound. “We worked with the architect, David J. Baird of Building Ideas, LLC, and everyone involved agreed that the clean, beautiful aesthetic of the chapel was of primary importance. That said, they worked with us to optimise loudspeaker placement. We chose Ashly Audio for all of the processing, amplification, and user control because we’ve had years of great experience with Ashly. Their gear always works out of the box, and we can always count on continuous performance year-after-year. Ashly Protea DSP is flexible and powerful, and all of Ashly’s audio paths are transparent. Simple user control was also very important because we had to be sure that anyone at all could turn individual microphones up or down.”

Those microphones reside at the lectern, the podium, the presider’s chair, and the reader’s stand, and a bank of eight microphone inputs sits near the choir area. In addition, Cook placed the chapel’s electronic organ on its own input. Senior Technician, Rick Redfern configured the modular input/output count of an Ashly ne24.24M digital matrix processor to handle 16 inputs and deliver eight separate outputs. All of the ne2424M’s processing is customised to provide natural, intelligible speech. A four-channel 150W Ashly SRA-4150 provides power to a Tannoy loudspeaker system that is divided into front, middle, and rear zones. The processor delays those signals appropriately so that all sound appears to originate from the front of the room. An Ashly TM-335 public address 35W three-input mixer/amplifier powers a handful of 70-volt loudspeakers.