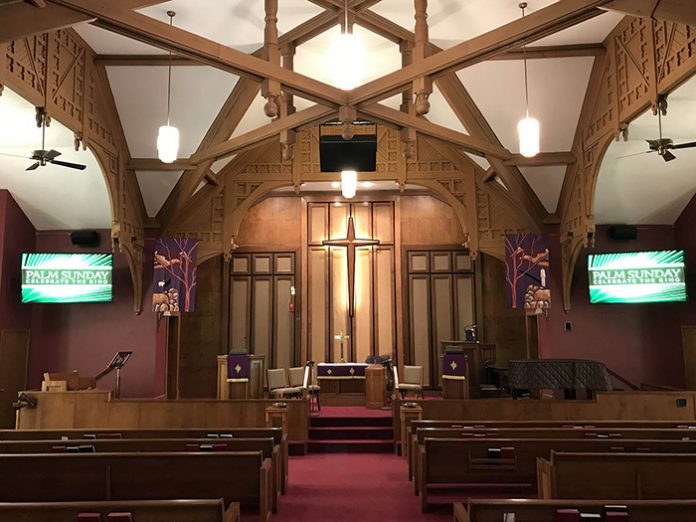 Built of stone and ready to last the ages, Valley Valley United Methodist Church glows with the light of classic stained-glass windows. Although age and history work to the church’s advantage in most cases, its old sound system was not so charming. Wichita-based A/V integration firm McClelland Sound remedied that with the design and installation of a new sound reinforcement system including a pair of Ashly Audio nX-Series multi-mode amplifiers.

“Valley United Methodist Church has a traditional service style, but they’ve started adding in more instrumentation and other contemporary elements,” explained Paul Colella, Vice President at McClelland Sound. “The sanctuary seats around two-hundred people, but their ageing sound system was not adequately serving them. Intelligibility was a big issue, as was consistency from service to service. They needed an overhaul, and we were careful to design a system that would allow them to expand the elements included in their services in the future.”

“There are two main reasons why we use Ashly Audio and Community,” Paul said. “First, they make excellent products – great features and great reliability – and they make them in the USA. Second, our manufacture representation, Michael Canning of Cadon Technical Sales, really takes care of us. He’s on top of it, always makes sure we’re aware of inventory, and handles everything so that we can focus on our clients.”

Valley United Methodist Church wanted the new system in place for its big Easter service, and McClelland Sound not only met that deadline, they had the system installed and running several weeks ahead of Easter. “That way, the big Easter service wouldn’t be its maiden voyage,” Paul concluded. “It’s been in place for several weeks now, and everyone is thrilled with the improvement.”