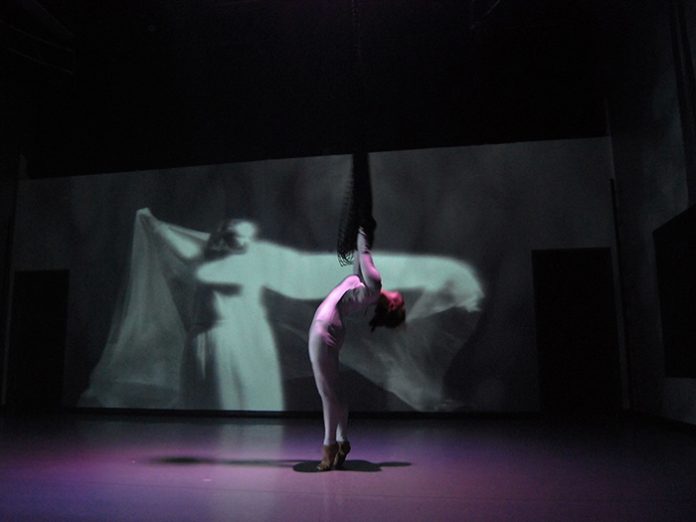 Scott used a single projector to project a mélange of imagery onto the back wall of the performance space, which mixed live and pre-recorded content for the show. Scott filmed images of the dancers in stages of preparation for the performance – close ups of faces, arranging hair, donning point shoes etc – and juxtaposed these with live images of the performers in mid-air and on stage. The opening number to the show (DSC 0013) included ‘shadow’ images of the dancers which Scott was able to synchronise with the live performers, using MediaMaster to slow down and speed up the pre-recorded footage to match the movements on stage.

A slightly different technique was used (DSC 323) when Scott created a backdrop for an aerial performance mid-show, by pre-recording footage of strong wind buffeting trees and using MediaMaster to slow the speed of the video right down. “This created a fabulously atmospheric blurring of the original image which I projected onto the back wall behind the aerial act to give a dark, moody feel to the scene.”

Scott also made use of MediaMaster’s edge-blending feature and its ability to control different layers of an image for the closing number of the show (DSC 358).“We filmed a dancer in a white dress with a transparent material articulating around her as she moved under a very harsh light,” said Scott. “I used MediaMaster to slow the movement right down and switched on the frame blending function. With this I was able to run the content extremely slowly, yet still maintain an tremendously smooth image rendition. The result was a very ghost-like image, over which I layered a smoke effect to give it a glowing bloom, and interspersed it with video of the live performance. I was able to do all this by simply feeding raw video into MediaMaster and editing it within the software through layering and effects.”

The back wall was flanked by six Chauvet Epix 2.0 Strips arranged in two vertical columns and controlled via ArKaos Klingnet protocol. All lighting, including the Epix, and the ArKaos video was controlled via a Jands Vista S1 console running version 2.3 software on a Macbook Pro.

“I first used ArKaos MediaMaster in 2013 and have used it on many productions since,” said Scott “I really like the system – it’s very easy to use and very flexible and can turn its hand to anything. I can use it on any show from the very simple single surface one like Smooth Operators to extremely complex shows with multiple projectors or LED wall surfaces. The Jands Vista Time Line Editor is the fastest and most efficient management system around. The speed and ease afforded by the graphical interface (GUI) makes it so different from any other console. I don’t have to remember any channel numbers or groups, I just select my fixtures and the parameters I want through the GUI – it’s like having a Magic Sheet on a console. The combination of the Vista and MediaMaster together is a great way to work.”