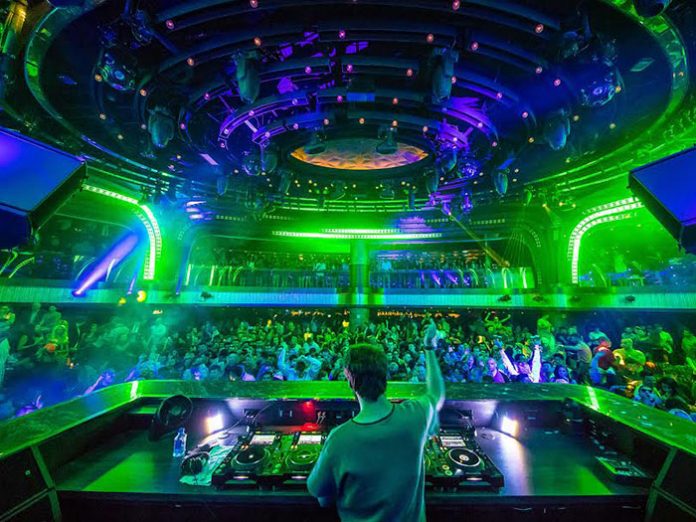 Jewel is The Hakkasan Group’s newest night destination venue in Las Vegas, right in the heart of the Aria Resort & Casino, a stunning looking space embracing some serious production values and fully focused on the guest experience.

Robe moving lights – forty eight Pointes, eight xDLX Spots and eight x ColorStrobes – are central to the lighting rig, once again designed by the Audiotek team led by Frank Murray. Dublin; London, based Audiotek has worked on a number of other premium projects for Hakkasan Group, and for this one they designed, specified, coordinated, project-managed and commissioned the club’s technical infrastructure, including lighting, video and audio.

When it came to lighting the club, there was already a large amount of LED in the overall visual design for the oval shaped room, which has a domed ceiling comprising concentric rings of video with four prominent pillars – also clad in pixels – at each corner.

Audiotek wanted to avoid the frequently seen cliché of following the architecture and ending up with another club with a ceiling crammed with circles of lights.

“However, we also didn’t want to ignore the architecture and form completely, so instead devised a design uniting both criteria with a ring of lights around a relatively small oculus feature in the center of the room,” explained Andy.

Most of the Pointes are rigged on ‘spines’ starting at the oculus feature and reaching out across the room. Rigged in groups of four, they can work as old-skool ACL beams – a look that’s currently trending. In the end-to- end orientation, they are also spaced to subtly mimic the contours of the celling.

This dual positioning has enhanced the flexibility and variety of looks that can be created. “It’s not the most obvious physical lighting rig design for the room, but I think it helps make Jewel different and interesting,” stated Andy.

With so many LED elements and mappable pixels in the room and surrounding the dance floor, the task of lighting was simultaneously challenging and inspiring for the Audiotek team. To combat the levels of ambient lighting being kicked out by the video and LED surfaces, they decided that beams should be the main luminaires.

“The Pointe continues to be a workhorse fixture for all our large club installations at the moment,” Andy commented. Pointes are normally the fixture they pick and place first in a design.

“Placement is key to getting the best out of beam lights,” he enthused, so once he had worked out where the Pointes should go, they became the backbone of the rig … and everything else followed!

The client had also made it clear from the outset that they didn’t want another epic looking EDM club, so the DL4Xs provided a bit of finesse, some nice gobo work around the room and can double up as performance key lights.

Four of the ColorStrobes are positioned at celling height, directly above the dancefloor, pointing straight down, with one each on top of the four vertical LED-clad pillars at the corners of the room just below ceiling height and firing in on the dancefloor. They are used for both strobing and as blinders and crowd pleasers.

The fronts of the pillar-mounted ColorStrobes are visible so the patterns can clearly be seen while the fronts / patterns are not visible on the lower ones in the ceiling, just the actual light emanating from them, so the interplay between the eight ColorStrobes can be a dynamic effect in its own right.

“Robe offered us some uber-cool fixtures with which to create an invigorating new venue in this capital of clubbing,” said Frank, “They continue to produce innovations that enable us to enhance our own demanding creative visions, and it’s a pleasure working with these dedicated professionals”.