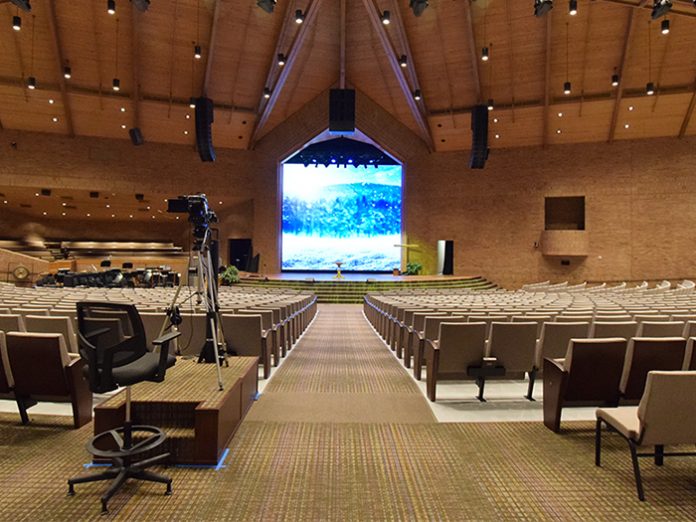 The former system had “noticeable performance issues,” according to Glenn Peacock, Executive Director of CSD, who served as the design lead on the project. So Ted Watson, Sales Manager at Nashville-based Holloway Sales, which reps Analog Way products, arranged an on-site demo of the Ascender 16 with Analog Way’s Midwest Regional Sales Manager Sean O’Reilly. They configured the system and had it up and running in the sanctuary in a few hours.

“The Ascender addressed all the problems CSD had been having with the other equipment,” said Ted. “I sat down with the church’s tech team for a basic tutorial, and they were working on their own soon after. They quickly were confident they could run a service from scratch with the Ascender.”

“Once Ted set up the templates and showed us where the macros were the system was quite easy to work with,” explained Mark Kotlarczyk, Director of Technical Services at Calvary Church. “There are just four buttons we regularly use; the Ascender is a set-it-and-forget-it product that performs consistently.”

The Ascender 16 drives the Vanguard LED wall to support sermon content, display worship lyrics and showcase imagery illustrating an educational series on books of the Bible. “The LED wall vividly and dramatically impacts the congregation even those who are 125 feet away,” said Mark.

Calvary Church is also used by the community, and the new LED wall and Ascender are expected to be deployed for an upcoming public high school graduation and other events.

Mark and Assistant Director of Technical Services Joey Symonds will complete Analog Way’s LiveCore Certification Master Class to gain a deeper understanding of the Ascender’s capabilities and how to implement them. “It will be great to see what designers and creatives are doing with the system and to envision things beyond our current horizon,” Mark said. “We’re also ready to put the Ascender into the hands of some of our volunteers now.”