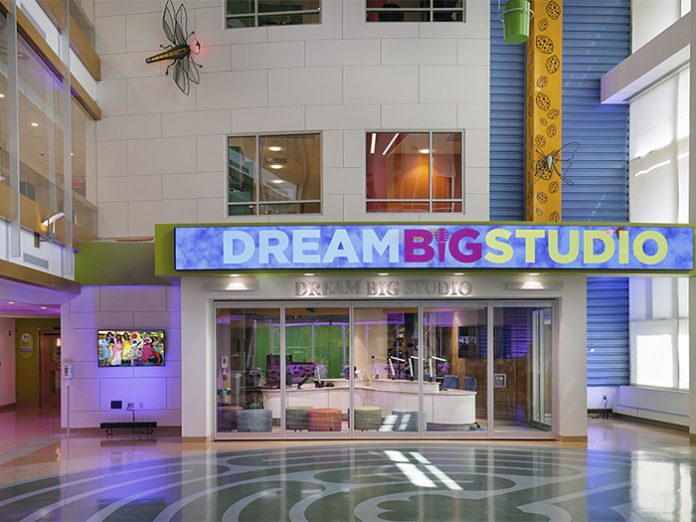 A new state-of-the-art media production facility at a major US children’s hospital, funded by private donations, gives ambulatory patients a chance to participate in content creation while children in isolation can join in as interactive participants. Children are having fun creating content for an in-house, closed-circuit radio and television station.

The studio teaches children through entertainment and peer interaction as they DJ radio shows, appear as on-air talent and run the lights and cameras for live game shows, celebrity interviews, and cooking, science, art and music programs. Taped shows are also produced in the studio and at sites around the community. The studio, which opens onto the hospital lobby, features a ribbon-shaped LED video display above its glass windows. The display is driven by an Analog Way Picturall Quad media server.

“The media production facility gives children a chance to escape from what’s going on in the hospital,” noted Mark Grassi, Principal Consultant with The Sextant Group an NV5 Company, which designed the studio’s AV, acoustics and speciality lighting. “Every child can join the community even if they are bedridden by calling into shows and playing the live games and winning prizes.”

The studio entrance is topped by a ribbon-shaped Planar LED video display with a resolution of 5120 x 360. Analog Way’s Picturall Quad media server enables full-screen playback of custom content across the display at full resolution.

“The Picturall Quad is rock solid and reliable. It allows playback of full-resolution content, and is easy for non-technical people to operate with cues to play clips and cues to overlay PIP windows from the studio,” explained Seth Teates, Regional Sales Manager at Analog Way.

“The LED display wasn’t originally intended to have the wow factor it does,” said Mark. “We discussed the display’s possibilities and a donor made it happen. The display can be customized for holidays and special events.”

Mark, who has used Analog Way equipment on other projects, said that Picturall Quad was selected for “its functionality and price point: It’s very accessible for projects of this size. It also has an easy-to-use interface to change content for the display. A marketing and media team has created a library of different looks for the display.”

He reported that there have been “no issues” with Picturall Quad. “The client is very happy with it and continues to build their content library for the display and use it for things we hadn’t anticipated.”

James Viviano, Senior Consultant at The Sextant Group, acted as Project Manager for the studio. SoundCom Systems handled the installation and commissioning.