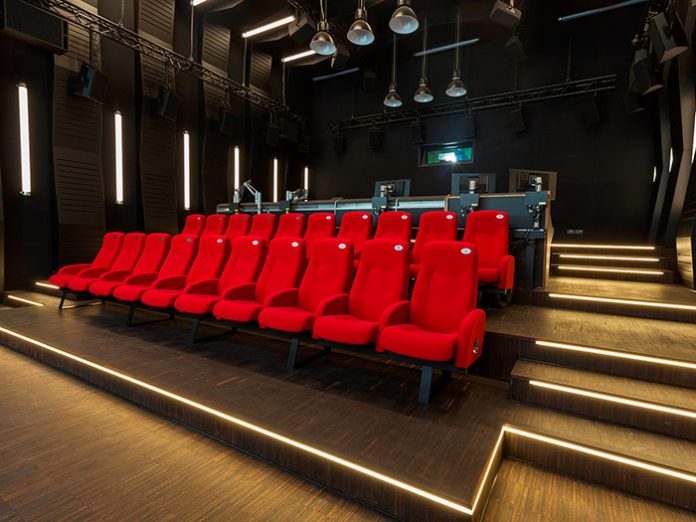 Following the devastating summer floods of 2013, the Mitteldeutsches Multimediazentrum (Mid-German Multimedia Centre or MMZ) in Halle, aims once again to work its way up to the premier division of film and post-production. Its newly designed studios were presented to the public in September 2015. AVs Medientechnik GmbH, from Berlin, under the project leadership of Florian Strucken, was responsible for planning cinematic sound mixing in compliance with the highest current acoustic standards and the very latest image processing technologies. System integrator Amptown System Company won the tender for the installation of media equipment. After successfully acceptance-testing the complex media equipment, the Berlin-based system specialists carefully trained the team of technicians on location in its operation.

During the catastrophic floods of June 2013 the four lower floors of the MMZ, which is situated right by a branch of the Saale River, were completely flooded along with their studios and all the equipment in them. Approved flood relief funds were used to return the Multimedia Centre to its original use. As a result, Halle can now compete once again in the global film and television production market alongside other film-making locations such as Berlin and Munich.

Amptown System Company’s task was to restore to the studios outstanding cinematic sound and the best possible image processing. Most of the flood relief funding flowed into the construction of the new cinematic sound mixing facility. This occupies the previously little-used movie theatre on the second floor of the MMZ’s cubic block, putting it out of the reach of any future floods. In addition to the new sound mixing facilities, MMZ will from now on be offering top-level professional image editing so that the studios can attract more work. The client’s aim was to procure the very latest AV technology in order to set itself apart within a permanently changing production environment and secure long-term, successful utilisation for the benefit of Halle as an industry location.

A total of three post-production studios were set up at MMZ Halle: a 7.1 Dolby Atmos Premix Stage, a grading and image processing studio, and a Dolby Atmos cinematic sound mixing facility which is also suitable for image post-production. The acoustic demands were very high because the aim was to create the first studio in the German-speaking world to feature the Dolby Atmos Premium Standard.

Dirk Asmus, ASC Project Manager, described the installation: “The new sound editing station has an American Harrison MPC5 digital film mixing desk with 64 faders, 16 displays, integrated Madi-Routers and 40 MADI I/Os with up to 2,560 input and output channels, as well as the appropriate signal processors for mixing movies in Dolby Atmos format. Various audio interfaces were also incorporated in order to enable different devices and effects processors and their digital audio signals, such as Dante, Madi, BluLink, AES/EBU, to be connected to one another. This created a well-equipped work-place offering masses of potential for pre-production and video preparation, which includes full downwards compatibility with older formats such as 5.1.”

ASC Berlin installed a total of 44 Studt-Akustik speakers to Dolby specifications at MMZ. They are driven by Crown DCI-8-600 N and DCI-4-1250 power amps to provide movie theater sound. “This technology allows the viewer to experience the same outstanding sound everywhere,” explained Dirk Asmus. “regardless of where in the studio they’re sitting.”

4K picture facilities demonstrate how far the MMZ in Halle has advanced as a new, high-performance, high-tech location for post-production. “With high frame-rates – which means up to 60 images per second – and High Dynamic Range contrast, the image editing facilities here in Halle are state-of-the-art,” said Andreas Nowak, Managing Director of MMZ Halle.

The smaller grading studio is situated in the suspended cube, where a Barco DP4k-P post-production projector is also used. Colour correction can be performed in either studio. The projectors are identically configured so that the venues can be allocated flexibly and working processes can proceed smoothly.

“ASC offers a top-level overall package from the very first discussions all the way to execution and follow-up,” continued Andreas. “We always felt that our wishes and questions were carefully listened to, and we really appreciated the constructive work we did together, in particular after the installation work had been completed. That’s when ASC clearly conveyed to our in-house technicians the technical procedures involved in the newly installed cinematic sound and image technology.”

Several Crestron control centres integrated by ASC effortlessly direct the numerous installed devices in the different areas of MMZ. They make it easier for MMZ’s in-house technicians to handle and centrally operate all of the media technology components.”