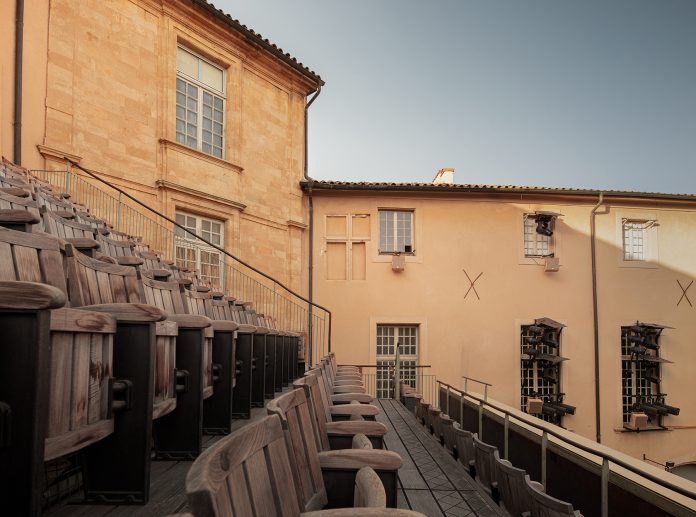 A unique tailor-made sound system was developed and installed by Amadeus within the Théâtre de l’Archevêché to subtly modify the acoustic characteristics of the theatre space using 35 microphones processed through HOLOPHOPNIX and more than 50 speakers to play the innovative mix of a live orchestra, choir, and stage performers.

Musical director and conductor of the ‘Pygmalion Orchestra and Choir’, Raphaël Pichon, made a special request to Amadeus to design and implement an audio technology system combining active acoustics and sound spatialisation to maximise the audience’s experience of the opera.

“The work carried out in collaboration with Amadeus’ teams could be compared with some kind of ‘sound restoration’. The Théâtre de l’Archevêché is a unique place, among the most evocative of the past of the old city — a place carrying the weight of the years. Its facade at the back of the stage is listed as a UNESCO World Heritage site.

“With its imposing skyward-stretching acoustic shell and its high stone walls overlooking the audience, there are genuine difficulties linked to the room’s natural acoustics, and orchestras have to face them,” said Aurélie Granier, Head of the Audiovisual Department and sound engineer.

“As he was aware of the sound issues imposed by the venue, conductor Raphaël Pichon asked us to develop an immersive acoustic support system for the spectators,” Granier continues. “We designed and deployed a tailor-made toolbox to get a more homogeneous, more detailed sound coverage for the orchestra, the soloists, and the choirs — and also to increase the natural reverberation time of the theatre.”

The sound system Amadeus designed combined a HOLOPHONIX sound spatialization processor — developed by the Amadeus company in coordination with IRCAM — along with an electro-acoustic system using over 50 loudspeakers, some of which were completely custom, clad in natural stone to make them almost invisible on stage.

“The reverberation time of the theatre is smaller than in other places designed for lyrical art, and it varies according to the zones — including rear seats, balcony, and sub-balcony.

“Our approach was to homogenise the acoustic sounds coming from the orchestra pit with the sound of the choir and the singers on stage, to make them coherent in timbre, volume level, and reverberated field,” recalls Clément Vallon, musician and sound engineer, who assisted the Festival teams during the creation phase.

“We also noticed a sound propagation problem with the orchestra, which plays in a pit. This creates timbre problems on the winds and on the violins and degrades low-frequency definition. This is mainly audible on the floor seating area and especially under the balcony,” added Vallon.

Designed by Amadeus in collaboration with STMS (Music and Sound Science and Technology), a laboratory founded in 1995 and hosted by Institute for Acoustic/Music Research and Coordination (IRCAM), the HOLOPHONIX processor is already installed in many theatrical, musical, and museum institutions in France, including the most prestigious theaters, such as the Théâtre National de Chaillot, the Comédie Française, La Scala, the Panthéon, the Avignon Festival, and more.

The HOLOPHONIX processor can use several reverberation and spatialisation techniques allowing one to position, move and reverberate sound sources in a 2D and/or 3D space.

“A spatialisation algorithm based on Wave Field Synthesis (WFS), associated with several parametric reverberators, was selected for the Festival system to intuitively place the virtual reflections and spatialise the acoustic sources present on stage and in the pit.

“According to the complexity of the device and the objectives set, we chose to work only with parametric reverberators, discarding convolutional or regenerative solutions,” said Adrien Zanni, researcher and developer at Amadeus for the HOLOPHONIX project.

“This technology gives us full control over several parameters, allowing us more freedom and facilitating differentiated work by zones, independently for each sound source. The system is very adaptable, allowing us to meet the demands of the conductor and the artistic team. IR reverberators usually make it possible to quickly obtain satisfactory results, but the available settings lack finesse.

“The convolution operations necessary for IR use huge resources and create latency, thus preventing using multiple reverberation channels, plus using IR doesn’t allow fine adjustments compared to parametric reverberation. We wanted to isolate sound sources and work independently on the soloists, the choir, and the orchestra, to fine-tune their reverberation, excluding the spectator area from the capture, to maintain more precision and control,” added Zanni.

The electro-acoustic setup is made up of 52 speakers, facing, surrounding, enveloping, and sometimes overhanging the audience, to recreate virtual acoustic reflections as naturally as possible and to support the singers and musicians.

“The audio infrastructure is articulated around a Dante network including a redundant setup, it’s a light and flexible technical system. The system was designed to integrate seamlessly with the equipment already in place, including a Yamaha CL3 console, and several Yamaha RO and Rio stage boxes interconnected by Yamaha SWP switches. The HOLOPHONIX processor and the Powersoft amplifiers are all Dante compatible so integrating them was easy,” explained Vallon.

“The Yamaha CL3 mixing console provided processing and mixing both to HOLOPHONIX for the distribution of the reverberation sounds and the sound reinforcement of the orchestra, as well as the monitors in various spaces of the theatre. We used 15 microphones to capture the sound on stage and about 20 mics for the orchestra”, added Vallon.

Describing the use of the microphones and how HOLOPHONIX used their inputs, Vallon said, “The microphones placed in the stage frame were exclusively dedicated to the reverberation system, as well as to the acoustic reinforcement of the sub-balcony. We used a ramp of six DPA 4011 microphones equipped with preamplifier cables for more discreet integration.

“The positioning of the virtual sources was determined to preserve the natural location; although some microphones, such as those suspended at the top of the stage cage, were primarily exploited to generate early side reflections. For the orchestra, we opted for zone-mixing, creating four pre-mixes in the console which were then sent to the HOLOPHONIX processor as four virtual sources positioned at the level of the orchestra”, concluded Vallon.

All the loudspeakers placed in front of the stone walls of the theatre got a special finish by Amadeus made of natural stone powder. Amadeus worked closely with French heritage conservation specialists to find the best shades and materials to make these speakers almost invisible.

“The HOLOPHONIX project has always been fed by the desires and requests of its users, its customers, and the constraints they ask us to solve. This allows us to continually evolve and innovate.

“A major number of the algorithms and functionalities currently integrated into the HOLOPHONIX solution are the result of developments carried out with and for other cultural institutions, many of them carried out in collaboration with IRCAM.

“This innovation contributes to increasing and improving our tools and our knowledge. This principle is confirmed once again here, at the Théâtre de l’Archevêché,” said Gaëtan Byk, President of the Amadeus company and creator of the HOLOPHONIX brand.

“The request from conductor Raphael Pichon and the Festival teams led us to dive back into a field that fascinates us, closely related to sound spatialisation: active acoustics,” added Byk. “Several principles were prototyped, tested, listened and validated this summer at the Archevêché. We still have unlimited concepts and principles to experiment with in this open-air laboratory; a jewel of Aix heritage.”

“Using modern audio techniques for classical works is a major challenge because it involves addressing concretely current issues relating to perception, sensation, and imagination while responding to strong demand from spectators and artists in terms of listening quality.

“In this digital era, and the perpetual quest for fast-moving technology, the most important challenge to be met is to know how to use moderation while wisely using the tools our era gives us access to,” concluded Granier.