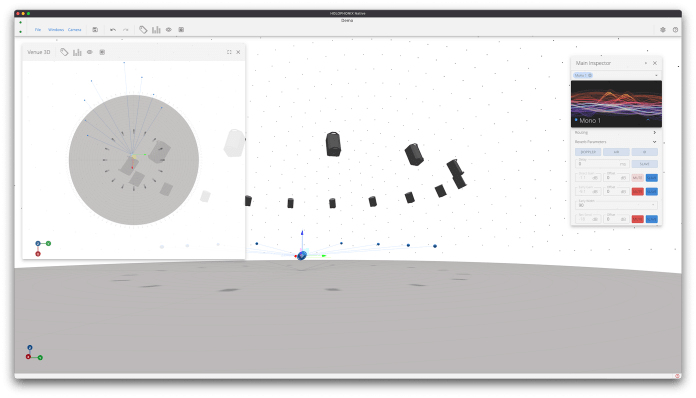 Amadeus has announced a native macOS application version of the HOLOPHONIX immersive sound processor, opening the power of HOLOPHONIX to a completely new audience of music and sound creators.

“As sound spatialisation needs keep growing, the success met by the HOLOPHONIX solution led us to imagine other implementations, to support its democratisation and its deployment,” explained Gaëtan Byk, CEO of the Amadeus company.

“The HOLOPHONIX Native software is primarily intended for composers, artists, sound engineers, and polymorphic creatives, who wish to produce, compose, and spatialise sound material for a small number of loudspeakers in the studio, live or listening to headphones in binaural,” explains Johan Lescure, Head of HOLOPHONIX Project Development at Amadeus.

The software offers an almost unlimited number of spatialisation buses and virtual sources. The only limitation is the number of physical output channels, limited to 16. Every parameter of the HOLOPHONIX processor parameter can be controlled via the Open Sound Control (OSC) protocol. In addition, a virtual audio driver called HOLOPHONIX Bridge is available free of charge, allowing inter-application routing without additional latency, and thus a direct connection with almost all DAW like Pro Tools, Nuendo, Ableton Live, Reaper, Logic, QLab, etc.

HOLOPHONIX Native will be presented during the Integrated Systems Europe exhibition, booth 7Q901, which takes place in Barcelona from 10 – 13 May 2022.

The software will be available for download from 1 June 2022 on http://holophonix.xyz