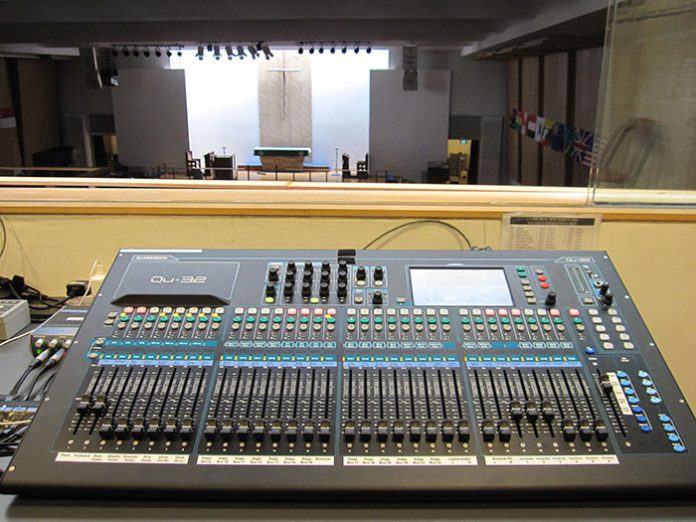 St Andrew’s Cathedral is the Cathedral Church of the Anglican Diocese of Singapore, which was consecrated in 1862 and gazetted as a national monument in 1973. Located within the Central Business District, the Cathedral offers a respite and a calm oasis to the many who worship in it.

Just like many other churches, St Andrew’s Cathedral faces a typical challenge where there are a number of different services that are conducted and each service has its own mixing needs for its various musicians and choirs. Also, short time frames add to the stress of getting the mix ready for the next service.

However with Allen & Heath’s Qu-32 digital mixer, which offers 32 Inputs and 24 Mix Outputs, these can now be problems of the past. It has been designed for seamless intuitive operation with all the controls easily accessible through the 7-inch full colour touch screen and a streamlined logical interface. In the Cathedral, the Qu-32 digital mixers are installed in the traditional worship hall at the Main Building and the contemporary worship space at the Extension building.

“The Cathedral has many services running back to back especially on Sundays from as early as 6.30am to 9.30pm. With the previous analog mixer, there were “resettings” that needed to be done especially during service changeovers. This caused some anxiety amongst our volunteers manning the mixer as the time in-between services can be as close as 3-5 minutes. Getting the mixer ready in time for the next service can be challenging. The numerous buttons / knobs can be a headache especially for new volunteers and there were times when missing that one knob caused some embarrassment,” commented Kevin Quek, Facilties Manager at the Cathedral.

“With the Qu 32, we preset the scenes to the service requirements. Now all that they need to do is to recall their scenes and almost instantaneously, everything falls into place, ready to go. One volunteer commented that now they have “so much time” on their hands whilst waiting for the service to commence, which also means there is no more stress. In the start, there were anxieties expressed by our volunteers when they heard that we were going digital. They were worried that they would “mess up” during the services. These fears however proved to be unfounded once they were hands on with the mixer.” continued Kevin.

There is a mixture of young to middle age volunteers and the initial fear was that they would not be able to cope with the digital mixer and that the services on Sundays would be affected. Arrangements for a familiarisation course were made and conducted by Simon Wong from E&E. The response was fantastic as close to 40 volunteers showed up and a second mixer was prepared so that others would have a chance to explore the mixer.

Since there were still some uncertainties and anxieties that needed to be addressed after that, sessions were arranged for different services, and more training based on their service needs and they were provided with hands on sessions, which were made available for a good two weeks before the mixers were finally installed. It helped tremendously as the confidence of the volunteers grew. They met up close with the Qu-32 and were surprised as to how easy it was to use it. It helped that the Qu-32 has a close resemblance to an analogue mixer.

The church has two different sanctuaries. The traditional worship is held at the Main Building and the contemporary worship is held at the Extension building. The Extension building’s sound system is close to 10 years old and the Spirit 8 mixer was beginning to fail. It triggered the hunt for another mixer. The mixer at the main building is a Presonus 24 channel, replaced some 3-4 years back. The sound system itself is almost 15 years old. The Presonus was also showing some signs of failing so a decision was made that it too should be replaced with the same Qu-32 so that the volunteers wouldn’t have any problem when they swap places.

“The House of Worship environment is unique in the sense that the people responsible for the mixing of the sound are generally volunteers. A lot of time is saved with a mixer like the Qu-32, which works intuitively and helps make the operations much easier. It is always very satisfying when we see that the solutions provided work to our clients’ benefit,” commented Gary Goh, Deputy Managing Director of Electronics & Engineering.

The Allen & Heath Qu-32 is designed with a logical layout, so you can get to what you need, fast. Featuring touchscreen control, 32 AnalogiQ preamps, instant recall, 33 motorised faders, high-efficiency ARM core processing, an integrated multitrack USB recorder, and much more, the Allen & Heath Qu-32 packs quite an impressive feature set for a digital console in this price range.