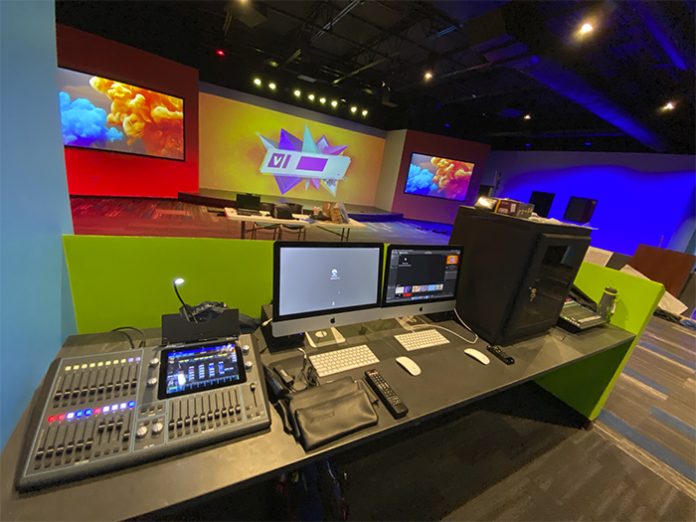 Since 1878, First Christian Church (FCC) has been growing and changing with the times. The Elizabethtown, Kentucky campus took its latest technological leap with the addition of an Allen & Heath AHM-64 audio matrix as the hub of their children’s area expansion. A shared pre-K and elementary school worship area was built over the summer to support two worship areas as well as 10 classrooms, all designed to double as a space that could be used as a daycare center during the week.

Church leaders required control in each room for local inputs as well as control over shared audio spread throughout the campus wing. Additionally, a paging mic needed to be programmed into the system to duck audio as announcements were being made or in case of an emergency. A unique critical requirement was the ability for each classroom to adjust their local inputs and adjust the volume of the shared inputs to their classroom while disallowing control over the volume of the paging mic.

“This project had a number of interesting aspects for sure,” noted JCA Media integration specialist Alex Peake. “We were excited to be one of the first folks to grab an AHM-64 in the US and it was such a great choice. We used the AHM-64 as the processing hub for the audio in each zone and utilized several IP controllers for simple user-friendly access in each classroom. The AHM-64’s built-in priority ducker came in handy and checked off that requirement box. Luckily, the AHM-64 utilizes similar dynamics processing from Allen & Heath consoles, so we knew it would sound great. Each of the 10 classrooms used an IP1 that allowed for easy source selection and volume control. An IP8 was used in the small worship area for a five-input setup in lieu of a regular-sized console, which would have necessitated another operator. I grabbed my Mac and fired up the AHM-64 System Manager software to fine-tune the programming, complete with controller simulation to guarantee the proper controls were sent to each location.”

In total, there were 65 AHM-64 presets managing 28 inputs and 12 outputs/zones, remote control via IP1 and IP8 controllers, and physical I/O routing via DX168 portable expanders.

“From the get-go, it was easy to set up,” added Alex. “The IP controllers were a piece of cake to get rolling. Having a parametric eq, graphic eq, and a limiter on every zone let us tackle system tuning without having to use the speaker processing if we didn’t need to. The priority channel is money. It’s the precise function the client was asking for and they were absolutely ecstatic. And the zone-to-zone mixing in the AHM really changes the game — it is just so stinkin’ handy!”