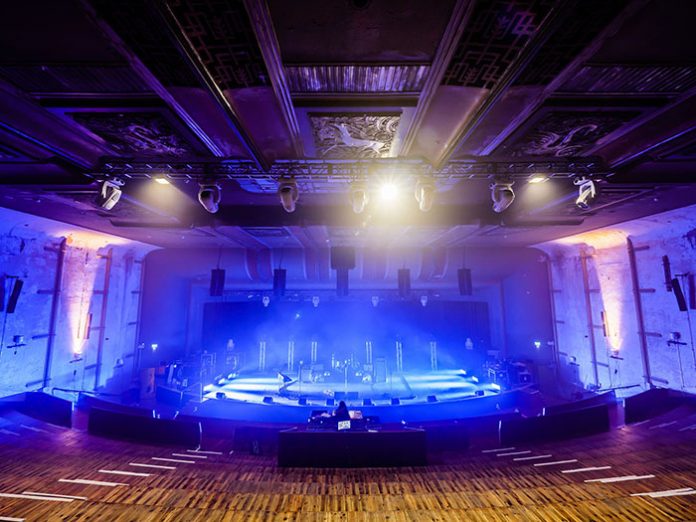 Adlib worked closely with client Auro Foxcroft and his team, with support from L-Acoustics’ Sales Manager, Paul McMullan and Applications Engineers, Jeff Woodford (installation) and Sergey Becker (touring) to specify and install the 360° L-ISA system with the aim of delivering an all-round incredible audio experience for audiences and artists alike.

EartH is the brainchild of Auro, champion of Hackney nightlife and founder of Shoreditch venue Village Underground, a commercially successful, sustainable and community driven initiative that also provides affordable workspaces for artists and creatives. Lovers of the independent spirit, the experimental, and freethinking, Auro and his team drove this project to painstakingly restore the abandoned space to its former Art Déco splendour.

Adlib Director John Hughes explained: “Initially, when we first made contact with Auro, we were looking at a standard left-right configuration for both upstairs and downstairs spaces”. However, when Auro met Paul and Jeff from L-Acoustics on site, they highlighted how perfect the venue was for an L-ISA configuration.

Having an exceptional sound system was always central to Auro’s plan to reinvent the building, as he understands the importance of sonic excellence and in making a performance something truly memorable rather than just a show, a gig or a night out!

“After a visit to hear L-ISA in action in Highgate, the EartH team were amazed by the technology and convinced that it was the solution for their venue. L-Acoustics were incredibly helpful and the resulting audio system was very much born from a collaborative approach”.

This, and the fact that Auro is extremely hands-on with the venue’s programming meant “we could not have wished for a better partner for our first L-ISA install”, John confirmed.

The old cinema’s balcony – which had been closed off, forgotten and left derelict for 30 years after a final screening of Scarface in 1984 – is now a fabulous, new 750-capacity theatre and concert hall space.

The downstairs area has been reinvented as a lively, multi-purpose club and social area, and a new restaurant will be opened. Together these three spaces will be the heartbeat of an animated and inclusive performance-orientated environment, open for all to enjoy.

Adlib already has a very strong relationship with L-Acoustics and were asked on board for this project to share their extensive knowledge and experience in providing high quality, dynamic sound systems which meet touring and professional specifications and can cater for a variety of artists.

The ground-floor club-style venue demanded high SPL, and excellent low-end response for the DJ-led music programme. In the new theatre space upstairs, however, the brief was a lot more ambitious and complex; this is where Auro wanted the immersive system to support a heterogenic programme ranging from spoken-word, dance and performance art to jazz, rock, electronic, and all genres of music.

L-ISA is a multichannel ‘what you hear is what you see’ platform, ideally suited to bringing immersive sound into experiential venues. Fundamental to the philosophy is ‘connecting’ the audience to the sonic experience, bringing total clarity so both audience and performers feel like they are part of a smaller, deeper and altogether more intimate experience.

The L-ISA Scene configuration features five hangs of seven KARA loudspeakers, spaced evenly across the stage in line with the proscenium arch. Low-end response is augmented by four KS28 subwoofers flown in an end-fire configuration, the surround system features 12 Syva colinear loudspeakers, four each mounted on the side and rear walls, plus eight X8 overheads, which are flown from the ceiling to provide elevation to the mixing environment. Lastly, there are 10 X8s installed as lip fills which are fed from the aux send of each object within the L-ISA Controller.

Audio from the FOH consoles runs via MADI to the L-ISA Processor which outputs on MADI. The signals are then converted to AVB and distributed to the 18 LA4X and one LA12X amplified controllers driving the system.

Adlib project manager Rob Crossland commented: “This is a very straightforward and immersive L-ISA system with side, rear, and overhead extensions. As more venues move to L-ISA, this approach will allow touring productions to move between similar systems without re-working their entire show every night”.

He observed that they were fortunate with the room’s straightforward shape – once a balcony when the cinema was first constructed in 1936 – and that there were no other levels or nooks and crannies to deal with, as is sometimes the case with vintage buildings! This made it very straightforward to model in Soundvision, which handles L-ISA configurations seamlessly.

Talking L-ISA, Rob commented that when he saw – and heard – the system demonstrated at the Prolight+Sound show in Frankfurt, he knew it would be a game-changer. “We’re only really scratching the surface of the system while we learn more about its scope and depth. As mix engineers start exploring the possibilities, I think we’ll hear some spectacular results that just couldn’t have been achieved with a conventional approach”.

Paul McMullan adds that the team at L-ISA are working on new features as we speak, including acoustic enhancement through the all-new room engine so “this is just the beginning”.

Adlib’s KSE Sam Proctor attended the tuning and calibration session with the L-Acoustics applications engineers to learn more about the finer details of working with L-ISA technology.

Adlib also supplied two DiGiCo SD12 consoles to be shared between venues – selected for their on-board integration with the L-ISA technology via the L-ISA Desk Link, plus their power, flexibility and popularity. In addition, an Adlib line system and an L-Acoustics stage monitor package comprising twelve X15 HiQ monitor wedges and two SB18 subs powered by LA4X amplified controllers were supplied.

A stereo KARA system, one SB18 and four KARA per side, is installed in the club on the ground floor, supplemented by four SB28 subwoofers and four ARCS WiFo delays.

A comprehensive microphone stands and cables package from Adlib completed the specification.

Day-to-day, EartH’s house audio team of Luca Romani and Alessandro Melchior will be running the systems and providing support for visiting engineers utilising the L-ISA platform, they were also heavily involved in the equipment specification and installation.

They’ve been trained on optimising the system and the finer points of Immersive Hyperreal audio, as well as receiving supplementary on-site training from Sam Proctor on the esoterics of KARA, and the overall system management software, L-Acoustics Network Manager.