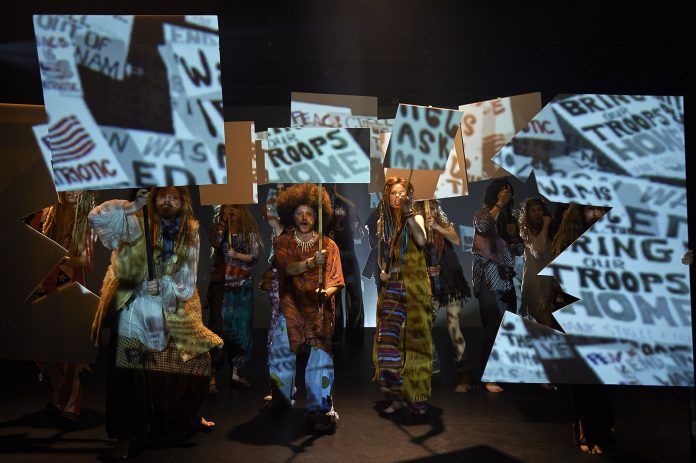 Aalborg Theatre is in the heart of Denmark’s attractive fourth largest city’s old town area. Established in 1878, it has a rich and colourful history and is known as a ‘heavyweight’ on the Danish theatre scene. This long standing critical fortitude was further advanced with the arrival of Hans Henriksen as artistic director in 2015, who had several key objectives including one to make the production programme more dynamic, cutting-edge and accessible.
One of the ways in which he’s achieving this is by changing the scheduling to repertory style, with several productions running simultaneously in rotation over several weeks, and this fundamental shift in turn demanded a different approach to lighting.
The installation of Robe DL series moving lights … has helped complex shows to be quickly and efficiently turned around – de-rigged, re-rigged and re-lit on demand!
Robe was selected primarily on the recommendation of three lighting designers working regularly in the theatre – Kasper Daugsberg, Stine Fumz and Matthias Hersland.
An initial purchase of five DL4S Profiles at the start of the 2016 season (September) was followed by a further investment of 13 x DL7S Profiles in mid-2017. These were the first profile moving lights that the theatre has owned.
The fixtures can be moved between any of the three performance spaces – a 450 seater main auditorium, a studio seating 150 in different configurations and an experimental space that can accommodate 50 people. However, the DL7S’s so far have been used primarily in the main house.
“It was a big change becoming a rep theatre, and we needed an extremely flexible and powerful profile fixture in-house,” explained Kasper. Up until that point they had rented profile moving lights as and when needed.
There are plenty of drama productions on the schedule, so silence was a big issue with the lighting, and the DL7 scored high as it is extremely quiet.
Energy efficiency is a general concern in green-conscious Denmark, so the LED lightsource ticked all the right boxes there, thinking of the environment whilst reducing the power consumption and ongoing running costs as well as lower maintenance costs and no consumables.
They received a good introduction to Robe from Danish distributor Light Partner, and Mathias, who also freelances for different rental companies, had worked with Robe on a few other projects, although it was only when the DL4S Profiles arrived at Aalborg that he really started to get more familiar.
Kasper too had encountered Robe before working on other shows and liked what he saw, however they still auditioned a few other options before making the final decision to go with Robe.
Mathias likes the combination of size, silent running and other essential theatre features like the framing shutters, the quality optics and ultra-smooth dimming curve – overall he thought it was a “refined and impressive fixture”.
When it came to looking at the DL7’s, CRI was top of the agenda as well as the enhanced colour range available via the 7-colour mixing engine. Robe has been at the forefront of the more recent manufacturing trend of focusing on quality of light, and both Kasper and Mathias highlight the importance of having the wider colour spectrum and the subtleties of seven colour mixing in theatre.
Kasper and Mathias both comment on Robe’s famous reliability. In a busy rep house, it’s essential to have kit that works day-in-day-out.
Now he has had a chance to use the DL7 Profiles to light a few projects, Matthias thinks they are “amazing”.
Kasper adds, “They are an excellent performance / theatre luminaire”. The first production at Aalborg on which he used the DL7S’s was the iconic 1960’s rock musical Hair.
There was a substantial amount of video on this, and he was extremely pleased to have the scope to blend well with the colours and hues of the video content, and also that the fixtures were well bright enough to hold their own. He also commented that they are easy to work with and quick to programme.
www.robe.cz