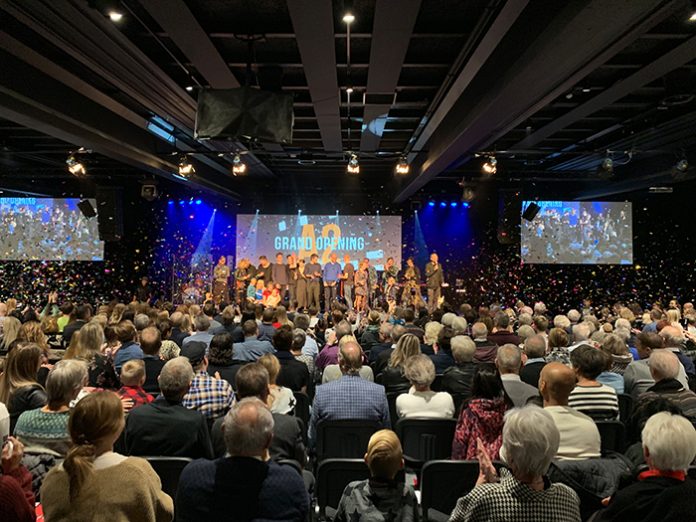 Originally founded in 1926 with just twelve members, what is now known as the Aalborg City Church in northern Jutland, Denmark, is one of the largest church organisations in the region. Having outgrown its previous premises, the church has recently moved to a new, fully renovated modern building able to accommodate around 1,000 people in total, including a main auditorium for 750. In order to provide clear, consistent audio coverage throughout the auditorium, the church’s AV department selected a HALO-C compact line array system from EM Acoustics supplied by EM’s Danish distributor, Alfa Audio.

According to Alfa Audio’s Torsten Matthiessen, the requirement was for a compact, efficient sound system that would cover the whole venue with no holes or hotspots. “A line array system seemed to be a no brainer for the venue – we just needed to find the right one,” recalled Matthiessen. “There are two clear priorities for any modern church system,” he continued. “Firstly, it needs to sound great from a musical point of view, as there will be a full band on stage for a large part of the service. Secondly, it has to be able to deliver crystal clear intelligibility as the spoken word is also a key element of the service. My feeling was that HALO-C would fit the bill perfectly, so I suggested that they should consider it.”

Anders Molin who acts as the AV consultant for Aalborg City Church was charged with finding the right system. “Initially I was looking at another manufacturer whose systems I have used for years, but Torsten recommended that I look at HALO-C. I wasn’t familiar with it, but after a visit to the factory in Cranleigh where we were able to hear the full EM Acoustics range as well as get to meet and discuss extensively with EM’s founders and designers, Ed and Mike, I was convinced that HALO-C was the right choice for us.”

The final system choice consisted of two hangs of six HALO-C elements each supplemented by four self-powered EPX-8 cabinets for sidefill, two EMS-61 frontfills and a centrally located MSE-218 sub positioned under the stage. The HALO-Cs are powered by an EM Acoustics DQ10 amplifier whilst an AD9 handles the sub and frontfills.

“Two things stood out for me,” noted Anders: “To start with, I love the way it sounds, especially the really smooth top end; the second very important point is the amazing price-to-performance ratio. The EM Acoustics system sounds every bit as satisfying as the other systems I considered, even less cost-effective solutions, so I’m confident that we ended up with the very best system for our requirements. To prove the point, we’ve had lots of comments from the congregation about how good the sound is in the new building, as well as remarks from visiting sound engineers who have come in with their bands about the quality of the HALO-C boxes. It was a good decision and I’d definitely consider EM Acoustics for future projects.”