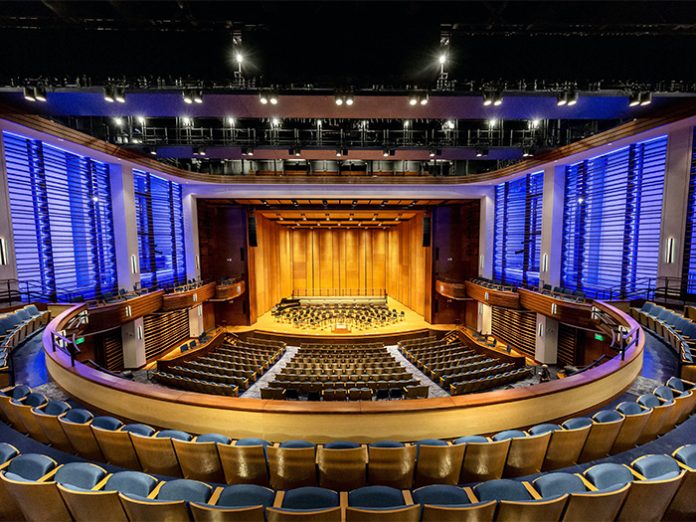 The Wenger Corporation has announced the installation of a custom Diva Acoustical Shell at Auburn University’s new Jay and Susie Gogue Performing Arts Center at Auburn University in Auburn, Alabama. The focal point of the 85,000-square foot Gogue Center is the 1,202-seat Woltosz Theatre, which required superior acoustics to ensure every type of performance would be accommodated.

“This region has always had to drive to Birmingham, Atlanta or Columbus to have exposure to touring performing arts,” said Taylor Dyleski, Director of Production at the Gogue Center. “Now, we get to bring that to experience to Auburn to make this an even better place to live and go to school.”

The foundation is a custom Wenger Diva Acoustical Shell that would have the flexibility to serve all purposes.

“We’re connecting the sound on stage to the audience, and allowing the musicians to really hear themselves, hear each other and react to the room,” said Russ Todd of Akustiks.

Ten Wenger Transform Motorized Acoustical Banners line both house right and house left of the audience chamber. They have the ability to be individually controlled, so the user can lower or raise them to adjust the acoustics in the room. The banners are controlled by a J.R. Clancy SceneControl 12 Motion Control System.

“It’s very customizable and adaptable,” said Chris Burke, Production Manager for Audio at The Gogue Performing Arts Center. “The banners are great for our multi-purpose venue. If we have a classical artist, the banners can be up, so we get the best live sound possible. We can put them down for amplified shows where we need to absorb the acoustic energy in the space.”

A shell of this size would normally take hours to set up and strike, but Wenger’s engineers made it so three people can place the entire shell into performance position within 45 minutes and strike in just 20 minutes.

Auburn staff decided to add Wenger Lieto LED fixtures into the shell ceiling. They opted for Lieto White and RGBW, which adds the option for multi-colored lighting on stage.

The fixtures provide more lumen output than other fixtures currently used in acoustical shells, meaning fewer fixtures are required in the shell ceiling. They’re also silent, which is critical for performers on stage, much cooler than conventional lighting and dim down to zero percent. Plus, they’re easy to adjust, with three-axis beam positioning to provide tool-free pan, tilt and rotation, as well as the ability for front-face focusing.

“Usually with acoustical shells, you struggle with lighting the orchestra so they can see and be seen,” said Paul Anton, Production Manager in Charge of Lighting at the Gogue Center. “With this system, everything is incredibly well lit, the colour is unbelievable, and we have a variety of options.”

“Now we have something up our sleeve for when we’re doing a Pops event or when we are presenting something unconventional in front of the shell,” Dyleski said. “We can do white light, and we can do a pop of colour on top of that white light, and it won’t affect the musicians while performing.”

Though acoustics were a priority for the shell, it had to be beautiful and blend into the existing room.

“It was a little bit of a three-way effort,” said Josh Stiling, Senior Associate Architect at Wilson Butler Architects. “We hit the ground running with the theatre consultant and acoustician. We had a great history with Akustiks and Theatre Projects and collaborating early was critical. The process involved several iterations and design reviews.”

Kelly Chiaradonna, Interior Designer at Wilson Butler Architects drew inspiration for the look of the shell from local materials. She used southern heart pine in both lighter and darker stains for the veneer of the shell.

The shell towers work well since theatre staff can move them around more easily, breaking them down in under an hour. The user has control over the curvature of the panels and depths of recesses in the shell ceilings.

“It was very fluid working with this team because everyone knows where their strengths are, and we knew what to expect from each other,” said Stiling. “This was a very collaborative design.”

As the theatre equipment designer on the project, Michael Nishball, Principal at Theatre Projects, took the lead and recommended J.R. Clancy automated rigging and controls.

On stage, they installed three PowerAssist Hoists, which have a 2,000 lb (907 kg) capacity per hoist, as well as a custom high-speed counterweight assist hoist on the house curtain and custom controls to maneuver it. The hoist can move up to 360 feet per minute (1.83 m/s), to quickly open or close the curtain. Finally, they installed a 60-foot wide by 38-foot tall (18.28-meters by 11.58-meters) steel-framed fire curtain, weighing nearly 10,000 lb (4,536 kg). To move it, the team installed a custom traction drive hoist with a lattice track and arbor.

For the front of house, they installed a custom portal header drum hoist. The frame weighed almost 10,000 lb (4,536 kg), so they installed a double purchase system. Next, they chose a custom drum hoist for the forestage reflector, allowing the user to change the angle of the reflector panel to achieve the desired acoustic results. A custom drum hoist for the forestage speaker arrays completes the system, which controls the synchronous raising and lowering of the left and right arrays.

“We worked with the design team, including the architect, theatre consultant, acoustician and Auburn staff to ensure we delivered what they needed while providing multiple options,” said Ryan Cole, Project Manager at Wenger Corporation.

“Wenger | J.R. Clancy has been a leader in equipment development and ISO quality control, as well as safety, training, inspection and maintenance,” Nishball said. “We have worked with them on many projects and enjoy collaborating with them.”

The Gogue Performing Arts Center opened its doors in August 2019 with a four-day festival featuring 27 performances at both the Gogue Center and the school’s outdoor amphitheater.

“It is a beautiful building that provides the area with options to bring in all different types of talent and performances,” Cole said. “The extensive customization allows staff many different ways to maneuver their systems to get the very best acoustics possible, no matter who is on stage.”

“The community loves it,” Burke said. “There’s never been anything like it here before. We have full houses for everything, and it’s great to see the local community support what we’re doing.”