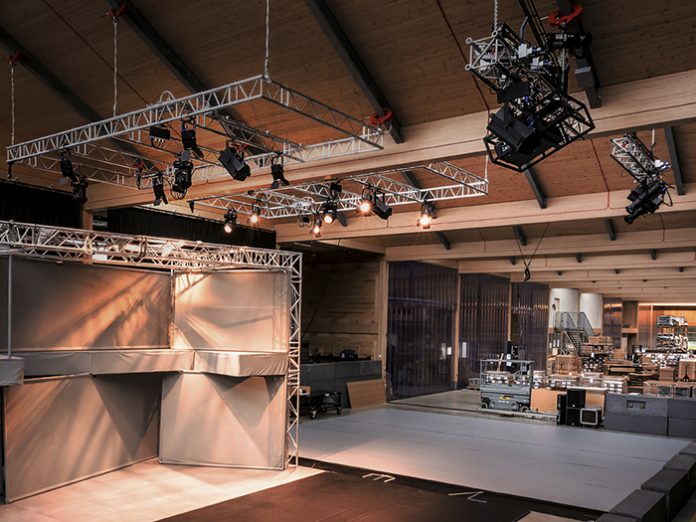 Celebrating its 30th anniversary this year, Motionhouse creates and tours a wide range of inspiring and powerful productions to theatres and festivals in the UK and across the globe. It’s distinctive, highly physical style integrates elements of circus and acrobatics with breath-taking dance to surprise and delight audiences, using powerful narrative and incredible digital imagery.

Earlier this year, Motionhouse moved into its inspirational new rehearsal space in the new home of British furniture manufacturer Vitsœ in Leamington Spa. The co-habitation was conceived by Vitsœ and Motionhouse to create a vibrant and like-minded working community, and Motionhouse’s move to Vitsœ received capital funding from Arts Council England as an example of an innovative creative partnership.

The state of the art building, which was designed by Vitsœ, makes an ideal rehearsal space for Motionhouse. Spanning 135 metres in length, 25 metres in width and 6 metres in height, Vitsœ’s vast, naturally lit and ventilated building features beautiful beach wooden beams and wall panelling throughout its structure from its high, arched roof to the spaced-out walls. It is a place of making and creativity and Motionhouse uses one section of the giant room, sharing the space with Vitsœ workers.

With the building’s bespoke design and beautiful aesthetics being chosen to reflect Vitsœ’s furniture, AC-SP needed to adhere to a strict technical specification in order for the installation to blend in with the building. As a result, the project required meticulous advanced planning and several onsite meetings, to ensure that every tiny detail had been addressed before installation took place.

The original idea was to have motorised truss grids within each of the rehearsal bays, however, initial costs were higher than expected. As a more cost-effective alternative, AC-SP project manager, Chris Little specified Sixty82 fixed ladder truss grids into each rehearsal bay, along with a three-metre motorised truss using Columbus McKinnon D8+ Model F motors and Kinesys load monitoring and control.

One of the key requirements from the building owner was that all of the truss had to be installed above the bottom of the timber horizontal beams. This was technically challenging, as a requirement from Motionhouse was to get the rigs a close as possible to the centre beam between each rehearsal bay. The building roof main I Beams are installed in a way to enable the optimum angle for letting light through the roof skylight, and optimum angle for the solar panels; 26.5 degree and 40-degree angles.

Traditional I-Beam clamps weren’t suitable for this installation, so AC-SP sourced Tiger beam clamps, which can take a load in any direction.

Other criteria included using only grey, black or white cabling, with all proposed cable routes planned onsite and approved by Vitsœ & Motionhouse weeks beforehand, to ensure a speedy but professional installation; liaising with Vitsœ’s structural engineer on the proposed truss grid loadings, and ensuring complete symmetry between each bay.

For Phase 1, Motionhouse wanted to use the new truss grid with its own equipment for performances during a 30th anniversary fundraising gala dinner that was only 4 weeks away. AC-SP ensured the solution was specified, approved and delivered in time for installation during a two-day limited window.

After the event, it was full steam ahead. AC-SP supplied PROLIGHTS Stark 400CC moving washlights, Eclipse FC Profiles and StudioCOB FC luminaires for each of the rehearsal bay rigs, arranged according to Motionhouse’s own LD’s design. A Pharos TPC touch panel controller enables the dancers to recall pre-determined lighting states for shows, along with general lighting scenes for day-to-day rehearsals. A Luminex Ethernet DMX8 handles the sACN to DMX conversion, along with data distribution to the fixed & motorised grids.

All related system components were supplied, including Tourflex Cabling® custom-length power & data cabling. A Triple E two-way curtain track was supplied, along with custom length curtains. Since the installation was completed, the system has been used for rehearsals of Motionhouse’s current touring production Charge.

Louise Richards, Executive Director of Motionhouse, commented: “We are delighted with the lighting and AV system. It has been a challenging project with some very specific requirements. However, A.C. Special Projects came up with effective solutions to all of our needs, which were within the very tight timeframe and on budget. The new production rig has really enhanced our creative space, enabling artists and performers to fully immerse themselves in their rehearsals.”