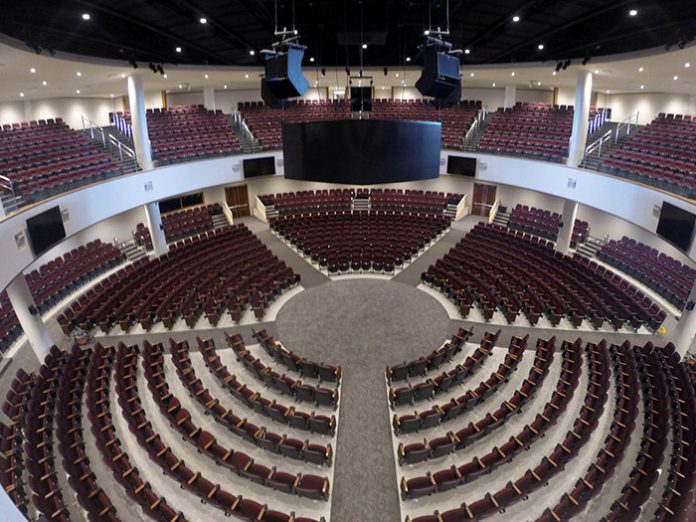 Acuity Insurance has been widely praised for being one of the best companies to work for in the United States. A recent $150 million, 320,000 square-foot addition to its headquarters includes a 43-foot climbing wall, a 66-foot indoor Ferris wheel, and a 2,000-seat theatre. Acoustics By Design, of Grand Rapids, Michigan, designed a sound reinforcement system centred on ten of Danley Sound Lab’s precision-pattern controlled SH-69 loudspeakers and an honest BC-415 subwoofer for Acuity’s theater, and Camera Corner Connecting Point, Green Bay, Wisconsin, installed it.

“Acuity will use the theatre for ongoing staff training and its quarterly, company-wide town hall meetings,” explained Scott Tomashek, lead engineer on the project for Camera Corner. “Acuity is also an excellent corporate citizen and will make the space available to the community for debates, chess tournaments, school events, and so on. It’s not for rent, per se, but they’ll make it available. They were previously holding their meetings in a combined six-room conference centre style, so the theatre is a massive upgrade.”

Tomashek continued, “Since it’s in-the-round, proper pattern control is especially important.” Tim Hamilton, a senior AVL consultant at Acoustics By Design, was the person responsible for the A/V design of Acuity’s new theatre. His design made excellent use of Danley’s tight pattern control to cover each section of the floor and balcony separately. Hamilton said, “I first got interested in Danley because their subs deliver such clean, undistorted bass. Through the subs, I was introduced to the Danley mid-high boxes, which also sound great. They have excellent clarity and excellent pattern control, both of which are essential for Acuity’s theatre. Moreover, Danley was happy to work with us to get self-powered versions of the Danley SH-69.”

The completed system consists of ten Danley SH-69 mid-high boxes arrayed around rigging above the central stage. Five serve the main floor and five serve the upper balcony. A massive Danley BC-415 subwoofer hangs in the centre of the circular array and energises the room with perfectly symmetric output. The self-powered loudspeakers and sub receive analog signal from a QSC Q-Sys signal-processing platform, which also feed a handful of QSC and Tannoy loudspeakers that function as under-balcony delays and lobby feeds. An Allen & Heath GLD-112 console serves as the user interface for town hall meetings and other media-intensive events, whereas the Q-Sys system provides simple operation for correspondingly simple events. Shure ULX-D microphones and a variety of media players serve as inputs to the system, which starts and remains digital until the very last stage.

“This is the first time I worked on a Danley installation, and I was really impressed by the clarity and the tremendous output that these boxes are capable of,” said Tomashek. “Whether the system is dialled back or opened up, the clarity and detail are amazing. I also enjoyed working with the people at Danley; they were very helpful and supportive. Whenever I had a question, they had an answer.”

Camera Corner partnered with Polar Focus, of Deerfield, Massachusetts, to get custom rigging for the Danley SH-69s. “We’ve worked with Polar Focus many times on past projects,” said Tomashek. “We give them the scenario, and they come back with fully-engineered hanging hardware. Not only does it hang safely and easily, they include the ability to make fine-tuning adjustments. In this case, we had the Danley boxes shipped to Polar Focus, so we received rigging hardware based on measurements of those very boxes. It worked well, and we were able to dial in small changes to make the coverage seamless.”

In addition to the audio system, Acuity has a new state-of-the-art video system. It consists of five custom 10’ x 6.5’ NanoLumens video walls that are raised and lowered on a winch system and allows viewing from every seat in the theatre. Five 90-inch Sharp display screens provide “visual fill”. Inputs to the system include six Panasonic PTZ cameras and various media players. A 32×32 Crestron digital media matrix feeds the screens, and a Crestron Capture HD allows Acuity to record the video and audio from its events.