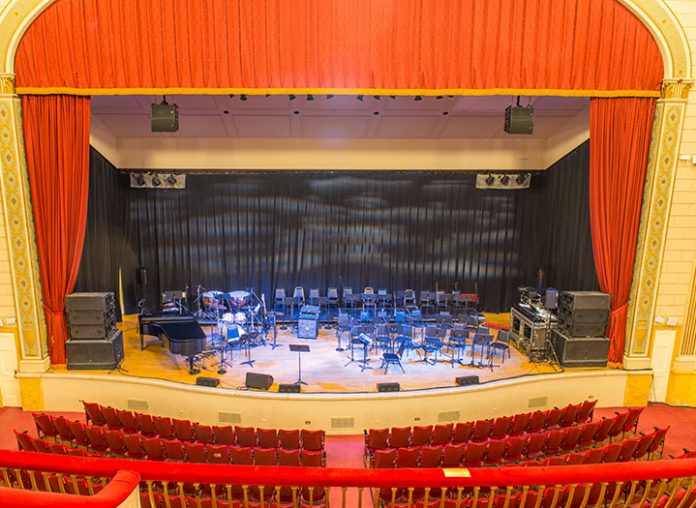 When a venue is renowned for superb acoustics, unobstructed sightlines, and world-class artists, its sound system had better be equally outstanding. Nobody knows that better than the management of the legendary Town Hall in midtown Manhattan. The auditorium has been one of the most respected concert halls in America since it opened its doors in 1921. That’s why, when Audio Incorporated of Roselle Park of New Jersey, was asked to specify a new sound system for Manhatten’s Town Hall, they selected Renkus-Heinz VL3 self-powered, 3-way line arrays.

Stephen Tolve, President of Audio Incoporated explained how Renkus-Heinz VL3 self-powered line arrays deliver a clear, transparent sound and that whether the show is classical, jazz or rock with artists like David Crosby and Jackson Browne, or A Prairie Home Companion, you want it to sound as if you were listening to the performance without needing a sound system-especially in a venue that’s famed for its acoustics.

Stephen further explained the benefits of the system in relation to the venue’s past difficulties: “The 1,500-seat Town Hall is a very wide room, with a short downstairs area, so there aren’t many rows in the audience down on the floor. The balcony however is quite deep, so coverage there was an issue in the past. Not with the Renkus-Heinz system, though.”

Tolve’s team chose three VL3 self-powered line arrays and one Renkus-Heinz DR18-2R dual 18-inch subwoofer per side for the main system. The system sits on carts that can be rolled out on either side of the stage.

There is minimal under-balcony seating at Town Hall, which makes coverage a bit easier. Still, covering every seat in the deep balcony could have posed a difficult challenge. Tolve solved that with two Renkus-Heinz CF101LA modular point source arrays per side, which easily handle the balcony and increase the patron’s experience.

Renkus-Heinz’ VerSys VL3 is an integrated, self-powered, 3-way line array system with dual 1,000 watt, 12-inch neodymium woofers. Smaller than comparable large-format line arrays, the VL3 works with Renkus-Heinz’ RHAON system-manager software and is designed for applications where outstanding sonic performance is a must, as with Town Hall.

The self-powered CF218-S subwoofer delivers a powerful sub bass punch and physical impact and is equally at home in fixed installations and mobile applications. The CF218-S subwoofers and VL3 arrays together form a system capable of handling anything from the most delicate classical and jazz to powerful rock. Stephen concluded by speaking about life before the Renkus-Heinz system: “Most artists brought in their own sound systems, but since its introduction, artists and engineers prefer the Renkus-Heinz house system; they love the sound.”

Indeed, although Town Hall’s long-standing mantra ‘not a bad seat in the house’ originally referred to its unobstructed sightlines. Now, thanks to the Renkus-Heinz sound system and the hall’s famous acoustics, the phrase applies to the sound quality too.