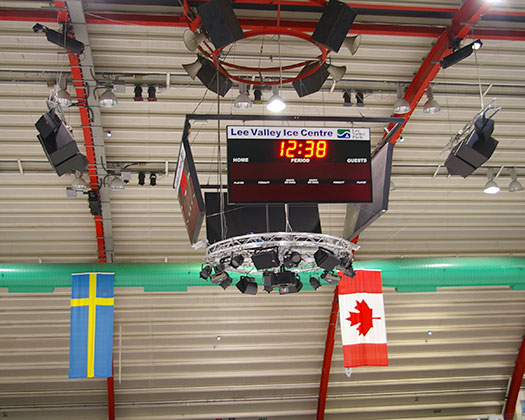 Lee Valley Leisure Trust came into operation in April 2015 to run 14 of the major sports venues and other sites owned by Lee Valley Regional Park Authority.

Last summer Martin Audio partner, Old Barn Audio (OBA) undertook a sound system upgrade at the £31m Lee Valley White Water Centre in Waltham Cross, one of the host venues for the 2012 London Olympics, using the manufacturer’s new CDD range. Such was the level of satisfaction that the integrators were immediately asked to provide a similar Martin Audio solution at another Group venue, Lee Valley Ice Centre in Leytonstone.

Within this cavernous space, the operators host a range of learn-to-skate and public skating sessions, while the international sized ice rink is also home to the Lee Valley Lions and London Raiders Ice Hockey teams and the Lee Valley London Skating Club.

But the 15-year-old system was starting to fail and parts were no longer available. Chris Bailey, Technical Manager, Lee Valley, Leisure Trust, said, “Based on the performance of CDD at White Water I requested the Martin Audio CDD speakers again but being a bigger venue it needed a more powerful solution.

“I had listened to the MLA Compact subs when OBA’s touring system was brought in for the ICF Canoe Slalom World Championships at Whitewater, and they told me that the CSX subs were voiced similarly. So based on the performance of the CDD10 with the companion CSX subs I knew Martin Audio was the way to go.”

OBA Directors Phil Clark and Neil Kavanagh created a cost-effective design that would enable them to work with the existing infrastructure. This would not only mitigate the pre-existing ‘spill’, but focus the sound over the rink while providing even coverage to the perimeter seating on all four axes.

The central roof truss houses a standard cube which displays digital scoring and timing, and also scrolls messages. Underneath is a circular truss to which OBA has fitted four CDD10, 10-inch loudspeakers. This is flanked by two further aluminium truss bars, fixed to the roof, and each supports twin CDD12, 12-inch, and twin CSX118F, 18-inch sub, via the Martin Audio flying yokes.

“The whole system has been phase aligned, time aligned and EQ’d so it is seamless – although we could virtually run it straight out of the box,” said Phil Clark. “The old system had delivered a lot of echo but we were able to tweak this using SMAART acoustic measurement.”

Programming is within a Symetrix DSP environment using the Martin Audio data files, and wall panels provide multiple source select across the seven zones; this not only includes the bowl but also the upstairs private Valley Bar where a further four stylish CDD8 (8”) in white are to be found.

At the main rink-side Technical Area ice hockey commentaries are also delivered. And since the venue hosts international skaters there is also an ice-side music station to enable elite skaters to bring their own MP3s.

Meanwhile, in peripheral areas such as the café a button mic will also read ambient noise levels and auto sensors will raise the volume levels of the music accordingly.

Main Reception is also where the new master PAVA paging control is found, with 16 pre-recorded cascading messages with evacuation/fire alarm protocols. The touch screen computer panel is alerted via the bespoke MP3 trigger system designed by OBA, feeding serial ports in the DSP. Other than Reception, further paging stations are located in the rink-side Control Booth and Managers Office.

Both Phil and Neil can reflect on another successful installation using CDD. Stated the latter, “We must have carried out 12 major CDD installations since Martin Audio first introduced the new product line. It is so well priced that we have been able to divert customers who couldn’t have afforded Martin Audio previously but who now can.”

Phil Clark added, “CDD delivers a lot of bang for the buck, and the system here has been entirely tailored to the venue. We are honoured to have become part of the Lee Valley procurement team and proud to have carried out our second CDD installation for them in six months using Martin Audio’s flagship product.”

Chris Bailey concluded, “The CDD installation has made a massive difference. The intelligibility is now fantastic and the frequency response and dynamic range of the music is now so much better.

“It has greatly enhanced the user experience and given us one of the best sounding systems at any ice rink in the UK.”